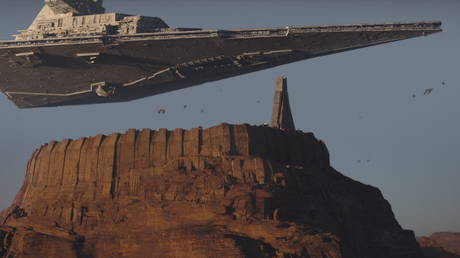 The US Air Force may be better known for its warplanes, bombs, and missiles than its geeky wit, but when it comes to naming its tech teams, the USAF boldly goes where every sci-fi fan dreams of going.

Speaking at the branch’s annual Air Warfare Symposium on Thursday, Assistant Secretary for Acquisition, Technology, and Logistics Dr. Will Roper revealed that the force is strong with the military’s current crop of scientists, engineers and programmers.

The Air Force’s best and brightest name their software teams after their favorite classic sci-fi, Roper told the gathering. One team is named ‘Kobayashi Maru,’ after a training exercise given to Starfleet Academy cadets in the Star Trek universe, while another is named ‘Kessel Run,’ after an interstellar smuggling route in Star Wars.

A long time ago, in a galaxy far far away, noted smuggler and Rebel Alliance pilot Han Solo claimed to have made the Kessel Run in slightly over 12 parsecs.


At present, the US Air Force is more concerned with terrestrial affairs. Particularly ironing out the litany of flaws and safety issues with the F-35 joint strike fighter, the Pentagon’s most expensive weapons system ever devised.

That said, President Trump signed the futuristic-sounding ‘Space Policy Directive-4’ last week, ordering the Pentagon to establish a Space Force, a sixth branch of the military that will fall under the Air Force’s command. Once active, naming its projects and teams will surely ignite the imaginations of the sci-fi minded within its ranks.