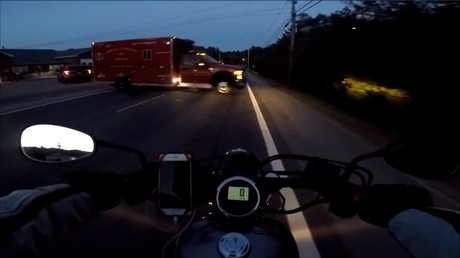 Rhode Island police are investigating how a special needs child seized an ambulance resulting in a horrific smash with a motorcyclist. The juvenile drove the vehicle after being brought to a local fire station to calm down.

The shocking incident unfolded after a mother and her son, who suffers from ADHD and autism, were transported by police to Central Coventry Fire Station after the boy became “unsettled”.

According to local police, the boy had agreed to be medically evaluated at the facility and was met by fire personnel. However, upon arrival the unidentified juvenile ran into a nearby garage bay and entered a parked ambulance.

The boy then locked the driver’s door and placed the vehicle in drive, sending the ambulance hurtling onto a nearby road. In an attempt to stop the ambulance, firefighter Scott Brown tried in vein to jump in through the passenger door but he was thrown onto the road.

CCTV footage shows the ambulance strike an unoccupied police car and causing a collision with a passing motorcyclist. Footage of the accident was also caught by the helmet cam worn by the motorcyclist at the time.

“The motorcycle operator was treated and released, and suffered a broken finger on his left hand,” it added, a Coventry Police Department statement read.

As a result of the incident Coventry Police Department and the local fire department have said they are “evaluating our protocols and procedures”.