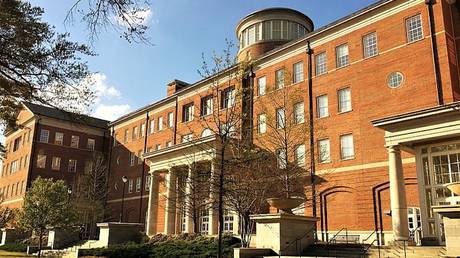 A University of Georgia (UGA) fraternity has been suspended after a video emerged showing a student mock-whipping another saying, “Pick my cotton n****r,” as others watched and laughed.

The video, which has circulated on social media, shows a member of the Tau Kappa Epsilon (TKE) fraternity hitting a fellow member with a belt as he repeatedly says, “Pick my cotton, bitch.”

The other student, who is lying in bed shouts, “I’m not black!” as the others in the room laugh. One then says, “You’re not using the right word.”

The student with the belt then changes his mantra to, “Pick my cotton n****r.”

UGA released a statement saying it was aware of the video showing students “using racist language and engaging in behaviors that mock the suffering of enslaved peoples.” Meanwhile, the university’s student government said it understands that an investigation is underway into the incident and the fraternity has been suspended.

The University of Georgia condemns racism in the strongest terms. Racism has no place on our campus. We will continue our efforts to promote a welcoming and supportive learning environment for our students, faculty and staff.

Tau Kappa Epsilon released a statement saying it had expelled four of its members over the video and that it was “disgusted, appalled and angered” by the remarks made in the footage.

UGA has a controversial history with slavery. In 2015, construction crews discovered over 100 human remains in what was a former slave burial site on land now part of the campus. The school was criticized for first claiming the remains were of people of European descent, and then for quietly reburying the remains in a largely white cemetery.

It was also accused of failing to adequately address its past ties to slavery.

the issue is so much bigger than just suspending some students, when all is said and done they’ll be fine. the issue is a racist mindset that’s outlasted some 400 years of slavery, and it will continue to persist until those that perpetuate it decide they want to change.

I see not much has changed with the frats from my time there.

@universityofga I’ve sat on Academic Honesty panels where UGA students were EXPELLED for signing each other into a class. I expect nothing less for those who display blatant RACISM.

Ensure integrity is upheld in ALL aspects.

Lmao expelled from the Plantation of Georgia? No they will just kick the chapter for a few years until black folks forget and let them finish their degrees. Than in a few more years their will be a new video with different greek letters.