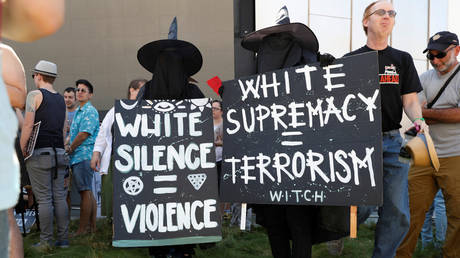 Massachusetts’ Amherst College has drawn criticism for publishing a ‘language guide’ to the latest social justice buzzwords. The ensuing fiasco is the latest battle in the neverending war over free speech on America’s campuses.

The college’s Office of Diversity circulated a ‘Common Language Guide’ last week. Flicking through its pages, the guide is an exhaustive list of the latest, politically correct, university-approved terms to describe pretty much everything.

Predictably, much of the guide’s pages are devoted to issues of class, race, gender, and sexuality, all covered from the furthest left position possible. From ‘Cultural Appropriation’ to ‘Biological Determinism,’ every social justice box is ticked. Did you know that “women cannot be ‘just as sexist as men,’” because ‘Reverse Oppression’ is not real? And when LGBT people’s achievements in the military are celebrated, that’s a blatant case of ‘Homonationalism.’

The list goes into minute detail. A “masculine-presenting queer black women whose gender presentation can be more fluid and/or androgynous than completely masculine” should simply be referred to as ‘boi,’ for instance. A ‘packer’ is a “phallic object worn in the underwear to give the appearance of having a penis.” The special underwear a packer sits into, by the way, is called a ‘gaff.’


The definition of some political terms puzzled critics. ‘Capitalism,’ for example, is described as a system that “leads to exploitative labor practices, which affect marginalized groups disproportionately.” Thanks for the one-line explanation of Marxism, Amherst, no need for that $72,000 per year economics degree any more!

The Diversity Office pulled the document from its website a day later. College President Carolyn ‘Biddy’ Martin admitted that its black-and-white statements on all things political, racial and sexual ran “counter to the core academic values of freedom of thought and expression.”

Prescribing a particular language and point of view is anathema.

The story didn’t end there. In another statement, Martin said she had received a deluge of emails from students objecting to the document’s withdrawal. Martin, however, stood by her decision to pull it, vowing to protect both freedom of expression and the concepts of respect and inclusion.

The guide, Amherst College Republicans said, shows that “some students at the college who proclaim to have inclusion as their ultimate goal are in actuality opposed to such a thing for those who believe differently than they do.”

Their statement is not a surprising one. Across the US, conservative student groups have long claimed their beliefs are not welcome on campus. A Republican group in University of California Berkeley sued the college for applying a ‘tax’ on right-wing speakers and won, in a landmark settlement. UC Berkeley made headlines a year beforehand, when protests against a visit by right-wing provocateur Milo Yiannopoulos devolved into full-on riots.

Also Leftists: “Here is your guide on acceptable language and beliefs. Failure to adhere to this guide will result in immediate disciplinary action.”https://t.co/43HxvYmsyX

More recently, Hayden Williams, a conservative activist with the Leadership Institute, was attacked by an enraged passerby on the Berkeley campus as he was handing out flyers. The attacker punched Williams multiple times in the head, calling him “b**ch,” “f**ker,” and “c**t.” Speaking at the Conservative Political Action Conference earlier this month, President Trump invited Williams on stage and promised to sign an executive order requiring universities to protect free speech on campus.

Trump, being Trump, also told Williams to “sue the college, the university, and maybe sue the state.”

Trump signed the order last Thursday, but college staff themselves have resisted the move. Even if college presidents, as the New York Times claimed, actually want to clamp down on the worst excesses of left-wing activism but can’t admit it publicly, professors are unsure. The American Association of University Professors have rejected claims that free speech is in danger on campuses, and called conservative efforts to codify and enforce free speech requirements an attempt to sway colleges to the right.

Also on rt.com
‘He took a punch for all of us’: Trump invites Berkeley attack victim on stage as suspect arrested


Even after pulling the Common Language Guide last week, Carolyn Martin said that the discussion generated by the incident served as “ample proof that we do not need an executive order to ensure freedom of speech or diversity of viewpoints on our campus.”

Still, while a Colorado university removes all mention of white men from its ‘American Political Thought’ course (even the founding fathers of America), and while off-color jokes at Portland State University see students hauled in front of the ‘Bias Review Team,’ the culture war is unlikely to end any time soon.