Activist groups seeking funds to help Hurricane Harvey relief efforts are coming under fire for alleged exploitation. One such group, the Texas Organizing Project, is being singled out for raising funds to benefit labor unions.

In a post on social media calling for donations, the Texas Organizing Project stated that all donations “will only be used to organize in the aftermath of Hurricane Harvey.”

The statement drew criticism that the group was a front for big labor and that the funds would support organizing the efforts of unions such as SEIU 1199, AFL-CIO, and the American Federation of Teachers, not hurricane victims.

“So you are scamming kind-hearted people out of money making them believe that you are going to help Harvey victims, is that it? Harvey victims need help now with the very basics of life, not political activists making money off their horrible situation! You should be ashamed of yourselves. As a Texan myself, I cannot believe how wrong-minded your solicitation for donations is,” charged one comment.

Another commenter opined, “All donations made here will only be used ‘to organize in the aftermath of Hurricane Harvey.’ So none of the money will actually be given to hurricane victims. Good to know.”

A repost of the fund link on Twitter by political activist Linda Sarsour generated over 1,000 comments criticizing the goal of the fund.

“Grifting money away from hurricane victims is about as low as someone can get,” one tweet read.

Another tagged the social network itself: “@Twitter @TwitterSupport these relief funds are being funneled towards a political PAC and not towards victims …. do something pls”

Leeching donations off disasters for “Texas Organizing Project” ? What a POS ! The left has lost their mind running after this scumbag !

Sarsour then tweeted that the ‘alt-right’ must have sent out an email blast.

“Alt-right” must have sent out an email blast. My mentions are on steroids.

Later she tweeted a list of organizations of where to send donations.

Calls to the Texas Organizing Project to ask about the fund and its beneficiaries as well as to SEIU 1199 were not returned.

Hurricane Harvey dumped over 51 inches of rain during a four-day period in Southeast Texas, and is on record as the wettest tropic cyclone in the United States. The resulting floods killed 20 people, prompted more than 13,000 rescues, displaced more than 30,000 people and flooded hundreds of thousands of homes.

The criticism against the Texas Organizing Project comes just days after a Houston megachurch, Lakewood, was condemned for shutting it doors to flood victims.

Criticism is also being leveled at the American Red Cross. A website has been created #NoRedCross, (until they fix their s&@!) criticizing the work of the organization, and listing multiple organizations, among them, the Texas Organizing Project, where donations could be sent.

“We hope the Red Cross proves us wrong with their work in Texas. Survivors need all the help they can get. From my personal experience volunteering with #OccupySandy, we learned real quick who was there for New Yorkers and who wasn’t. The Red Cross wasn’t there for many of us,” states the site.

“Instead, it was Occupy Sandy and a host of local, grassroots, faith based organizations and volunteers that changed everything.”

“We’re not alone. Those stranded during Katrina and many in Haiti and elsewhere have long documented the Red Cross’ systemic failings and little sign of reform.” 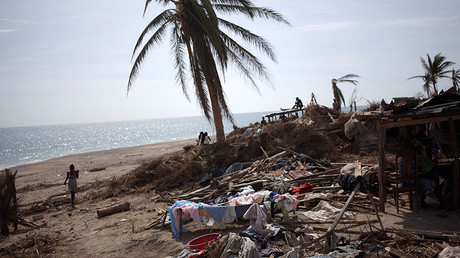 It is not the first time the American Red Cross has been criticized. In 2016, an investigative report by NPR and ProPublica found the national organization had raised half a billion dollars to aid Haiti after it was devastated by a monster 7.0 earthquake in 2010. It had only built six houses out of the promised 700 by 2013.

A former Haiti development worker, France Francois, explained to RT that when the money balloons during a disaster it goes to underprepared nongovernment organizations or to paying high international salaries for arriving staff.

“I think the American Red Cross is a good example of disaster capitalism,” she said, using an expression that was coined after the aftermath of the 9/11 attacks.

“There are a lot of other organizations that I am personally familiar with that have a terrible track records in Haiti… but the American Red Cross specially is an example of an organization that does not have the capacity to do large-scale disaster relief and reconstruction correctly, but continues to collect resources and money to do so.”