United Nations representatives in Mexico have said that the UN will not facilitate the transportation of some 5,000 caravan migrants to the US border since the issue has not been agreed upon by either Mexico or the US itself.

A delegation of some 200 migrants marched to the UN’s offices in Mexico City on Thursday, demanding the organization provide them with buses to the US border, which is still some 600 miles (965 km) away from the caravan’s current location.

The migrants in a meeting with representatives of the United Nations High Commissioner for Refugees (UNHCR), the United Nations High Commissioner for Human Rights (OHCHR) and the International Organization for Migration (IOM) said they were too exhausted and that it was getting too cold to continue the perilous journey on foot.

In a statement on Friday, the UN acknowledged the meeting but said that it does not have the authority to grant the request without the approval of the countries who would be affected by the scheme.

“Any help for the transport of migrants to a third country requires the prior agreement or request of the States involved,” the UN’s Mexico office said in a press release, without elaborating.

It is unclear how many people are currently in the caravan, with estimates varying from a few thousand up to 14,000 people, as reported by the Mexican newspaper El Universal late October. The sports stadium outside Mexico City alone houses 4,841 migrants, 1,762 of whom are minors, including 310 children younger than five, the Mexican authorities estimate. The Central American migrants, the majority of whom have traveled all the way from Honduras, were having a brief respite in Mexico City before resuming their US-bound journey. The Mexican government offered them asylum, but only a small number have reportedly agreed to file applications. 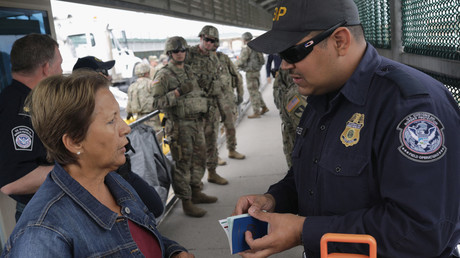 Some of the migrants, meanwhile, have decided to turn north hoping to reach the border city of Tijuana, south of the “sanctuary state” of California. To get there, migrants will have to travel some 1,700 miles to the northwest, a much longer route than to the nearest US border crossing at McAllen, Texas, which many consider it to be the safest option. The decision was made by the caravan organizers at the meeting late Thursday, while they were still waiting for a response from the UN.

The news comes after US President Donald Trump signed a directive requiring asylum seekers to make a claim at their point of entry to the US, thus denying illegal immigrants the right to request asylum. The order was designed as a temporary measure, as it runs counter to the law which states that anyone is eligible to have their case heard. Current asylum practices have long been criticized by Trump, as many such cases drag on for years, allowing illegal migrants to live and work in the US.

The US has deployed 5,200 troops to help border protection thwart what Trump has described as an impending migrant “invasion.” For now, the active-duty servicemen have mainly been erecting barbed-wire fences along the border and building shelter accommodation for customs and border protection staff.