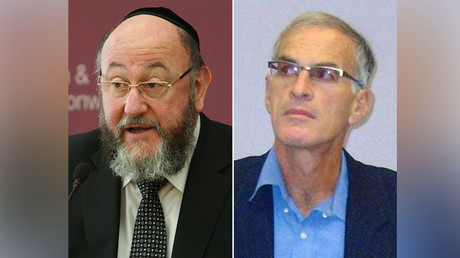 The UK’s Chief Rabbi Ephraim Mirvis has accused individuals in Labour of spreading the “insidious virus of anti-Semitism” but political scientist Norman Finkelstein believes certain members of the party are exaggerating the crisis for political gain.

Finkelstein first published the map at the center of the ongoing ‘anti-Semitism’ row and has since defended the suspended MP Naz Shah for sharing it on Facebook.

Finkelstein, a Jewish professor and author whose parents survived concentration camps during the Holocaust, claimed to have published the map entitled “Solution for the Israel-Palestine conflict – relocate Israel into United States” on his blog in 2014.

READ MORE: Israeli Labor considers break with UK party over anti-Semitism, despite own accusations of racism

The image was then shared on Facebook by Shah before she became Labour MP for Bradford West in 2014. But that was enough to get her suspended from the party just last week when it came to light.

The professor said the original post was “funny” and said it was “obscene” for Shah to be compared to Adolf Eichmann by her colleague John Mann. In an interview with Open Democracy, he said politicians were “jostling for power and position” in the anti-Semitism row.

Finkelstein said: “All these desiccated Labour apparatchiks, dragging the Nazi Holocaust through the mud for the sake of their petty jostling for power and position. Have they no shame?”

Rabbi Mirvis said he was astonished to see figures on the “hard Left” defining the relationship between Judaism and Zionism. He also warned that “there must be no place for anti-Semitism in our politics”.

“Jews are frequently compared to the proverbial ‘canary in the coal mine’, an enduring signal for when the world is failing to meet its obligations in tackling bigotry,” he wrote in an article for the Telegraph.

Labour’s suspension of Newport councillor @mndsc06 appears to relate to tweets from last year in which he compared Israeli regime to Nazis.

He reminded Corbyn of his previous description of Hamas and Hezbollah members as his “friends” and called on him to distance himself from that remark. Corbyn responded “I absolutely do not approve of those organizations.”

The war of words continued the day before the London mayoral elections where Labour’s Sadiq Khan goes head-to-head with Conservative politician Zac Goldsmith, who has been accused by Muslim groups of stirring up racial tensions by stressing Khan’s Islamic background.

Corbyn asked six questions about poverty and got six answers about how Sadiq Khan being a terrorist. What a disgraceful smear. #PMQs

If only we got principled debates about racism, smears and anti-semitism when there isn’t an election about to happen. #PMQs

Cameron also accused Khan of sharing a platform with anti-Semitic people and hate preachers in reference to Suliman Gani, who the prime minister previously said backed Islamic State (IS, formerly ISIS/ISIL), but turned out to be a Conservative supporter. Corbyn labeled it a “smear” campaign.

In the midst of the heated exchange in the House of Commons, Corbyn maintained that “anti-Semitism has no place in our society whatsoever,” and sent his “best wishes” to those commemorating Holocaust Memorial Day in Israel.