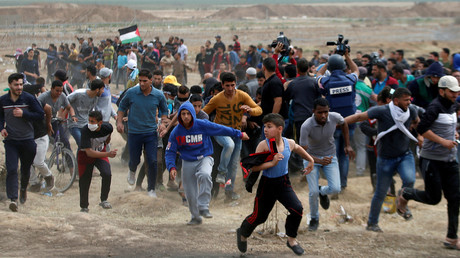 UK arms deals are once again in the spotlight, as new figures reveal sales to Israel have soared since the 2014 war in Gaza. UK weapons are now being used by Israel against Palestinians, according to anti-arms campaigners.

Figures compiled by Campaign Against the Arms Trade (CAAT), exclusively revealed by Middle East Eye earlier this week, show that the UK government has granted export licenses to supply components for combat aircraft, helicopters and drones, as well as sniper rifles and components for sniper rifles to Israel since the 2014 Gaza war. The figures show that some £320 million ($445 million) of arms have been sold to Israel in that time.

Campaigners fear that UK-manufactured sniper rifles may have been part of the arsenal used to kill 39 Palestinian protesters along the Gaza-Israel border in recent weeks, a point made by Andrew Smith, from CAAT, when he talked to RT UK’s Bill Dod.

“We’ve seen an even more severe clampdown over recent weeks with the shootings at the protests on the Israel-Gaza border,” Smith said, “and yet the UK has continued to arm and support the government of Israel.”

Since the Gaza War in 2014, also known as Israel’s Operation Protective Edge, yearly UK government arms sales to Israel have soared from £20 million in 2015 to a staggering £216 million in 2017, according to Department for International Trade figures.

During that time, a £183 million license covering “technology for military radars” has been approved by government ministers. However, the main concern for many campaigners appears to be the sale of small arms assault rifles and ammunition, sniper rifles and components for sniper rifles that may have been used by the Israeli military along the Gaza border.

Chair of Labour friends of Palestine and Middle East MP, Grahame Morris, has taken to social media to voice his concerns about the UK government’s approval of arms export licenses to countries such as Israel, saying: “Time to speak out on the shooting of unarmed Palestinians in Gaza. The UK government continues to approve arms exports to Israel despite its own guidelines prohibiting any sales of weapons that risk being used in violation of international law.”

Time to speak out on the shooting of unarmed Palestinians in Gaza. The UK government continues to approve arms exports to Israel despite its own guidelines prohibiting any sales of weapons that risk being used in violation of international law. https://t.co/eLV7YCxaML

A spokesman for the Department for International Trade said the UK “takes its export control responsibilities very seriously and operates one of the most robust export control regimes in the world.”