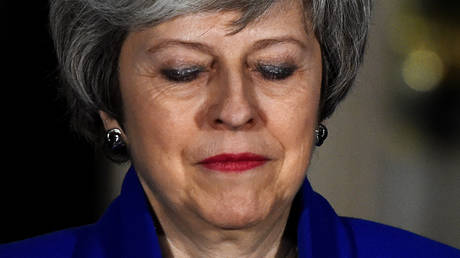 British PM Theresa May will present her Brexit Plan B before lawmakers on Monday, and the UK media is awash with speculation as to what it will contain. The original deal that she negotiated with Brussels was roundly rejected.

London has until March 29 to reach a consensus on how the country will leave the European Union, with the alternative being a no-deal Brexit that is likely to cause chaos and damage the British economy. Officials in Brussels indicated that they will not allow any substantial changes to the agreement they reached with Theresa May’s cabinet. That deal, however, was rejected by British MPs last week in a record defeat for a government motion.

“The clock is ticking, and unless some alternative comes into view, we’ll leave without a deal on March 29,” told RT Alan Sked from the London School of Economics. “Perhaps if she said she wanted now to negotiate a free-trade agreement, then she might get a little further on and get some support in the House of Commons. If Brussels says it won’t renegotiate, then her plan is dead.”

Also on rt.com
‘No more talks’: Theresa May shuts door on opposition parties, as Brexit descends further into chaos


On Monday, the prime minister will present her Brexit Plan B to parliament. Whatever suggestion she comes up with will be formally debated and voted on by the legislature no sooner than Tuesday next week, allowing at least eight days for consideration.

The biggest stumbling block for Brexit is the backstop provision, which is meant to ensure that there will be no hard border between Northern Ireland and the Republic of Ireland. However, this threatens to keep Britain as part of the EU free-trade zone for an indefinite period of time – contrary to the goals of Brexit.

According to the Daily Telegraph, May will try to overcome this predicament by amending the 1998 Good Friday Agreement, which put an end to violence in Northern Ireland. Officials in the EU are reportedly skeptical about May’s ability to do so.

Sky News says May will try to win over the Northern Irish Democratic Unionist Party (DUP) to circumvent the backstop contingency, while the Sunday Times believes she will seek direct negotiations with the Irish government.

Also on rt.com
‘I’m just Theresa, I need your sympathy’: Gollum actor returns to take down PM May over Brexit


There is also much speculation in the British media that MPs intend to wrest control over Brexit from the cabinet or even overturn the results of the Brexit referendum itself – which pro-Leave papers describe as a planned coup by the Remainer camp.