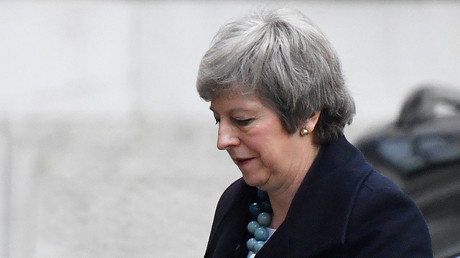 Embattled British Prime Minister Theresa May will face a vote of confidence in her leadership of the Conservative Party after the necessary threshold to potentially oust was reached by party’s 1922 Committee.

The move follows a week of chaos and speculation after May’s proposed Brexit deal was openly derided in the Houses of Commons.

“In accordance with the rules, a ballot will be held between 18:00 and 20:00 on Wednesday 12th December in committee room 14 of the House of Commons,” Graham Brady, the Chairman of the backbench 1922 Committee said.


Brady’s statement added that the votes would be counted immediately and an announcement made at the earliest possible opportunity.

The threshold of 48 letters, 15 percent of parliamentary party members, was reached when former cabinet minister Owen Paterson tipped the balance in favor of the long-rumored move to oust May as Prime Minister.

Speaking outside her Downing Street office after it was announced that the vote had been triggered a bullish May pledged to contest the vote with everything she’s got.

“A change in leadership at this time would put our country’s future at risk,” May said, adding that the mechanics of a new Tory leader would not change any fundamental issues associated with the floundering Brexit negotiations, as a new leader would not be in place by the January 21st deadline set for a new vote.

She added that the only people who would gain in such circumstances would be Labour Party Leader Jeremy Corbyn and Shadow Chancellor of the Exchequer John McDonnell, two vocal opponents of the Brexit deal.

May concluded that there was no point in “delaying or even stopping brexit when people want us to get on with it… we must and we shall deliver on the referendum vote.”

May confirmed that she will no longer be travelling to Dublin to meet Irish Prime Minister Leo Varadkar to further negotiations regarding the backstop agreement for Northern Ireland as part of the overall Brexit deal, a major sticking point.

She caught many MPs unawares Monday when she delayed the parliamentary vote on her widely panned Brexit deal, arguing that she wanted to avoid defeat and return to the negotiating table with the EU.

She will be removed as Prime Minister of Britain if 158 of 315 Conservative lawmakers vote against her Wednesday evening.

“Will be seen as self-indulgent and wrong. PM has my full support and is best person to ensure we leave EU on 29 March.”

The UK leader was due to travel to Dublin to speak with Irish Prime Minister Leo Varadkar on Wednesday however that trip has been cancelled.

There are now less than four months until Britain exits the European Union on March 29, 2019.