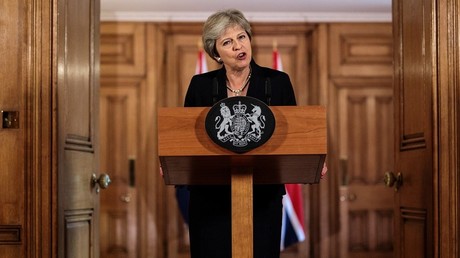 British PM Theresa May has demanded that the EU bring to the negotiating table a set of new proposals to break the “impasse,” declaring she will not “overturn the result of the referendum nor will I break up my country.”

Following the summit in Salzburg, Austria, of the 27 EU member states where EC President Donald Tusk declared May’s proposed economic partnership with the EU post-Brexit would “not work,” the UK PM has hit back saying “neither side should demand the unacceptable of the other.”

In her Downing Street address, she warned that EU proposals concerning the single market would lead to uncontrolled immigration and “make a mockery” of the EU referendum result. May also claimed that the EU’s Irish “backstop” proposal is unworkable, which would threaten the “integrity of the UK.”

May said: “The EU is proposing to achieve this [backstop] by effectively keeping Northern Ireland in the Customs Union. As I have already said, that is unacceptable. We will never agree to it.”

“It would mean breaking up our country. We will set out our alternative that preserves the integrity of the UK,” she added.

Bloomberg have reported Sterling taking a hit after May’s Brexit speech, dropping 1.2% against the Dollar. Reaction on social media to the PM’s speech has been less than glowing. Pro-EU Labour backbencher David Lammy, tweeted that “no-one voted for the no deal we’re on track for.”

Something very Theresa May about calling urgent news conference to announce that we’re stuck, nobody will move, nothing can happen, there will be no news till further notice

Theresa May repeats the hard eurosceptic spin that the referendum was a vote to leave the customs union. Nonsense. No specific form of Brexit was on the ballot paper and no-one voted for the no deal we’re on track for. This is precisely why we need a #PeoplesVote.

We are heading for no deal folks. And they’re going to blame the EU all the way to oblivion. Theresa May just sealed our fate live from Downing Street. pic.twitter.com/84iM9WQoWY

Formal negotiations on withdrawal began between the UK and the EU in June 2017 and talks on issues such as the rights of EU citizens and the Irish border have been slow going.

On July 6, 2018, after a marathon 12-hour showdown at Chequers, May finally managed to secure a Brexit plan to present to the EU. The Chequers deal was labelled a “stinker” by Boris Johnson as the plan would see the UK remain closely tied to the EU – but after the Salzburg summit Brussels dismissed it too, with talks have now reached an impasse.