Facing mounting pressure at home, UK Prime Minister Theresa May took aim at Russia, accusing it of the tried and trusted sins of endangering global security, election meddling, hacking attacks and spreading fake news, in what seems a desperate lunge for support.

Russia has emerged as the top threat to European democracy and security, May claimed as she delivered her remarks at the Lord Mayor’s banquet Monday. The embattled PM chose to focus her speech on international challenges rather than domestic issues, which she is struggling to deliver on. The apparent diversion comes amid reports of a potential no-confidence vote in Parliament Tuesday and in light of scant progress at the Brexit negotiations, which is increasingly being blamed on May’s lack of leadership skills.

Instead of asserting herself as a leader capable of guiding Britain through Brexit, May fell in line with the US mainstream narrative on Russia, repeating the by now worn out allegations of interference in other nations’ internal affairs, which Moscow firmly denies. 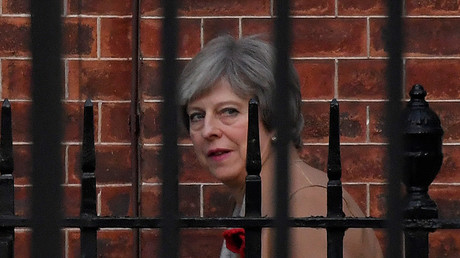 Russia is “threatening the international order on which we all depend,” May claimed, alleging that Moscow has been doing so by “meddling in elections, and hacking the Danish ministry of defense and the Bundestag [the German parliament] among many others.”

Russia is responsible for a range of hostile actions, such as its “sustained campaign of cyber-espionage and disruption,” to its military jets routinely crossing into foreign airspaces and it is to blame for fueling military conflict in the Eastern Ukraine, according to May.

Falling short of providing examples, May accused the Kremlin for using Russian media “to plant fake stories and photo-shopped images in an attempt to sow discord in the west and undermine our institutions.”

As the UK is seeking to leave the EU while inflicting as little damage on its economy as possible, May pointed to the need to resist the perceived “Russian threat” as an argument in favor of maintaining strong economic ties between the UK and the rest of the bloc.

READ MORE: Can Russia sleep easy now that fallen Fallon is no longer banging the drum for war?

“The comprehensive new economic partnership we seek will underpin our shared commitment to open economies and free societies in the face of those who seek to undermine them. Chief among those today, of course, is Russia,” she said.

Speaking directly to the Russian government, she warned of repercussions, without providing any details on what potential counter-measures would entail.

“We know what you are doing. And you will not succeed,” she said, again without specifying, adding, that Russia should not underestimate the stability and what she branded as “the enduring attraction” of the western society. 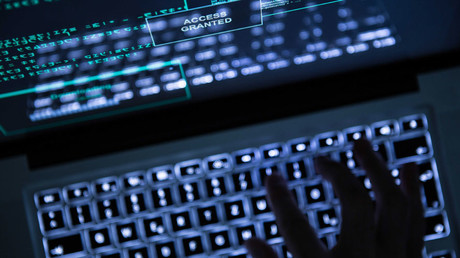 After urging all western countries to build a united front to confront an omnipotent Russia, effectively echoing Cold War rhetoric, May then took a more conciliatory tone, saying that “we do not want to return to the Cold War, or to be in state of perpetual confrontation” with Russia.To this end, UK Foreign Secretary Boris Johnson will travel to Moscow in the coming months, she noted.

The ball, according to May, is in Russia’s court. The PM said as long as Moscow does not change its ‘behavior,’ Europe will “act together to protect our interests and the international order on which they depend.”

Russia is being blamed so often it seems, for everything, that it has almost become a joke, political commentator Adrian Yalland told RT, arguing that while Russia “needs to answer some questions” the West needs to come to terms with the fact that Russia has reemerged as a great power and will continue to reassert itself.

“The West needs to actually take a step back and have a listen to what is going on, to understand that Russia is coming off back from seventy years of communism, quite right to reassert its sense of national identity and to project it strongly on the global stage,” he said.

If the West seeks a “fresh beginning” with Russia, it should acknowledge that ”Russia has its place in the world and the West has to respect this.”