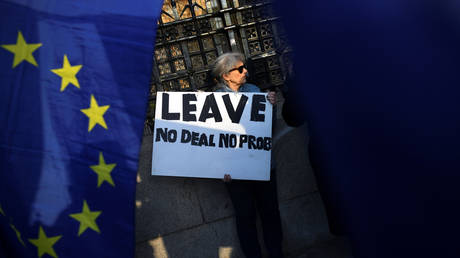 None of the alternative options to Prime Minister Theresa May’s Brexit plan has managed to receive the support of a majority of lawmakers, prolonging the political deadlock in the UK.

Motion C, Customs Union, which called for a commitment to negotiate a “permanent and comprehensive UK-wide customs union with the EU,” lost by 276 to 273 votes.

Motion D, Common Market 2.0, which asked for continued participation in the single market and a “comprehensive customs arrangement” with the EU after Brexit, lost by 282 to 261 votes.

Motion E, which asked for a public vote to confirm any Brexit deal passed by parliament before its ratification, also lost on Monday night by 292 to 280 votes.


After yet another attempt by the British PM failed to break the Brexit impasse, the UK now increasingly risks crashing out of the EU on April 12 without a deal. The UK lawmakers are set to hold another round of so-called “indicative votes” on Wednesday, before EU leaders hold an emergency summit on April 10 to consider London’s request for an extension of Article 50.