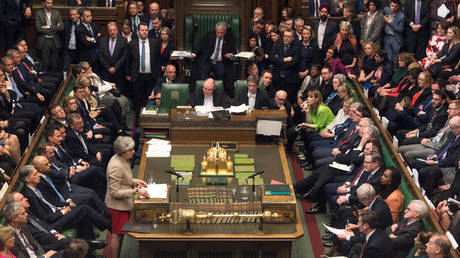 The Brexit storm clouds appear to have opened over British Lawmakers, as the house of commons had to be canceled for the day, due to water pouring into the chamber through the ceiling.

Commons deputy speaker Lindsay Hoyle halted proceedings on Thursday afternoon to allow the leak to be looked at. Around 25 minutes later the deputy speaker returned to the House to adjourn the sitting for the rest of the day.

The leak drew much amusement on social media with many seeing the incident as a metaphor for the current Brexit debacle. One Twitter user joked that hardline Brexiteer Jacob Rees-Mogg was behind it, ”busting pipes to take us closer to a No Deal.”

House of Commons suspended due to a huge leak in the roof. The cafe above is being submerged too. “This is how Brexit ends,” an observer remarked.

So the House of Commons chamber is closed for the rest of the day due to a water leak. Plot twist: it’s Rees-Mogg busting pipes to take us closer to a No Deal #Brexit 💧💦🌂🌂

It’s understood that the torrential leak started in the roof above the press gallery canteen, on the floor above the chamber.

Members of the press were removed from the gallery, as water was seen cascading down concrete walls and through light fittings at the back of the chamber.