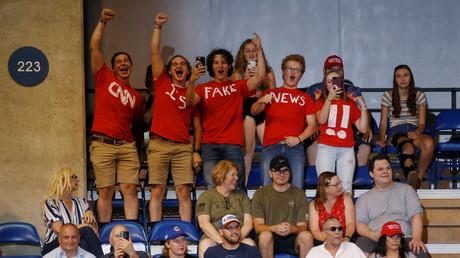 The UK government has banned one of Donald Trump’s favourite phrases. The term ‘fake news’ will no longer be used on official documents after a recommendation from the Digital, Culture, Media and Sports Committee (DCMS).

MPs will be allowed to speak freely in parliament, however the term will not appear on official papers as it is “bandied around with no clear idea of what it means.” The DCMS recommends the terms “misinformation” or “disinformation” instead.

READ MORE: Lunch and bananas: Leave.EU backers explain what really went on in those meetings with Russia

“With such a shared definition, and clear guidelines for companies, organisations, and the Government to follow, there will be a shared consistency of meaning across the platforms, which can be used as the basis of regulation and enforcement,” it stated.

The ban was instigated following the recommendation of the so-called DCMS’ ‘fake news inquiry,’ that sat earlier this year following allegations of personal data misuse by tech companies and Russian interference in EU referendum.

The inquiry issued a preliminary report in July, containing 42 recommendations. The government reportedly accepted three of the recommendations and dismissed four others, including a change in the rules covering political spending online, which would limit the amount of money an individual can donate.

The report also gave 9 recommendations relating to “Russian influence in political campaigns,” much of which relates to the alleged dealings that UKIP-donor and Leave.EU chief Aaron Banks had with the Russian Embassy. Banks was interviewed by the DCMS before acrimoniously exiting, according to the report “to avoid scrutiny of the content of the discussions with the Russian Embassy.”

Previously, chair of the committee, Tory MP Damian Collins said he was “disappointed” in the response to the report. Collins hit out at the government’s consistent insistence that there was no evidence of Russian interference in UK elections. A claim also denied by the Kremlin.

“We need to see a more coordinated approach across government to combat campaigns of disinformation being organised by Russian agencies seeking to disrupt and undermine our democracy.

“The government’s response gives us no real indication of what action is being taken on this important issue,” Collins said.