The UK’s arms deals with Saudi Arabia make it “utterly complicit in the destruction of Yemen,” according to Campaign Against Arms Trade’s (CAAT) Andrew Smith. The activist was speaking on RT’s Going Underground.

The government has signed off on billions of pounds worth of arms deals with Saudi Arabia, one of the UK’s largest weapons importers. The kingdom is leading the coalition that is conducting an air-and-sea campaign against Houthi forces in Yemen. The fighting has led to 10,000 deaths and left millions more in need of humanitarian aid.

The relationship is such that the kingdom’s powerful 32-year-old Crown Prince Mohammad bin Salman will visit the UK on March 7. Bin Salman’s visit, which will also include being entertained by the royals in Windsor, is expected to be the precursor for further UK-Saudi arms deals.

CAAT is one of several groups organizing protests against the crown prince’s visit. In the interview with Afshin Rattansi, Smith attacked the UK foreign secretary for hypocrisy, stating: “Even Boris Johnson has called it [Yemen] the worst humanitarian crisis in the world, yet it’s a humanitarian crisis caused in part by weapons licensed by Boris Johnson and his colleague.”

The damning indictment comes as the UK faces accusations of hiding the extent of its support for Saudi Arabia’s bombing of Yemen. A significant increase in the number of arms-export licenses from the UK to Saudi Arabia has been revealed by the Middle East Eye.

Since 2015 and the start of the war in Yemen, the UK has reportedly used standard arms licenses to sign off on over $6.4 billion of arms deals to Saudi Arabia. The deals have included fighter jets and munitions. 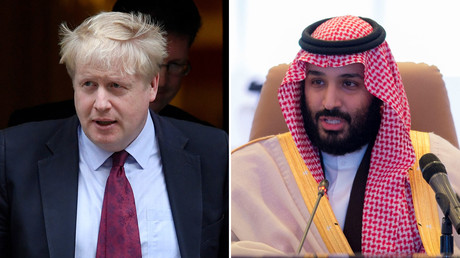 New figures compiled by CAAT and seen by the Middle East Eye show that the UK government has also utilized the secretive open-license system that allows the nature and price of arms to be obscured from the public domain. The figures show a 75-percent increase in arms deals using the open-license system to the Saudi Kingdom. Some of the deals include parts for jets that are used in the bombing of Yemen.

The revelations come just days before Saudi Crown Prince Mohammad bin Salman visits the UK. The royal, who has overseen the campaign in Yemen, will meet with Prime Minister Theresa May despite widespread opposition from activists and the Labour Party.

CAAT detailed that in 2017 some 36 open licenses were approved for 707 pieces of military or dual-use hardware for export to the kingdom. The number was up from 28 licenses and 163 pieces the year before.

The pieces exported include machine guns, sniper rifles and, crucially for the bombing campaign, parts for aircraft and helicopters. In total, the UK government has approved 85 percent of the individual open licenses and 1,127 hardware items since the start of the war.