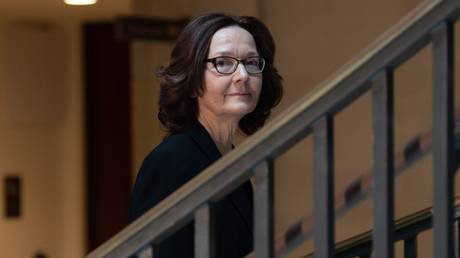 Women now control all three directorates of the CIA – a historic milestone for gender equality in the clandestine regime change/assassination sector. Rachel Maddow seems to be celebrating, but why is Twitter full of party poopers?

CIA Director Gina Haspel has appointed a fellow female comrade, Cynthia “Didi” Rapp, as deputy director for analysis, making her the highest-ranking analyst at the agency. As a result, the main branches of the CIA – operations, analysis and science and technology – are now headed by women.

NBC News toasted the agency’s all-female leadership with an article detailing the new “sisterhood of spies”. MSNBC’s Rachel Maddow – usually busy hallucinating about Vladimir Putin hiding under her bed – rushed to tweet the story, in an apparent endorsement of the new trifecta of unaccountable girl power.

Soon, dozens of Twitter users swooped in and rained on Maddow’s equality parade, rudely pointing out that the CIA is a cesspool of inhumanity regardless of who presses the clandestine drone strike button. Are these killjoys suggesting that Elizabeth Cady Stanton and other American suffragists weren’t dreaming of one day being able to murder and torture with impunity?

Really hope that oppressed women in Muslim nations appreciate that the drone above their heads was sent by empowered women. https://t.co/nurKeRge3c

Yes! We must fight for a woman’s right to be as sociopathic and toxic as any man. This is real progress. Liberty is just around the corner.

Hurray! Gender parity in the torture-murder-political-interference-surveillance-state sector is long overdue. Truly a wonderful time to be alive.

Women are now in charge of all 3 directorates of the CIA and run 4 out of the top 5 defense contractors. It’s a message of hope to all the little girls around the world: If you work hard and stay in school, one day you too can break the glass ceiling and get killed by a woman.

Among the sourpusses was Katrina vanden Heuvel, who suggested that the CIA needs more accountability, not more women. The nerve of this lady!

Value women acquiring power in many fields, but I don’t consider this progress-Need a new Church Committee- Not more women in CIA leadership. https://t.co/E0EzyNh4K6

Predictably, others argued that the sisterhood of spooks would normally be a very good thing, but Donald Trump being president somehow makes it very bad. Have fun making sense of that.

I LOVE YOUR WORK! But truly and respectfully, I couldn’t care less if the person running the show was male, female, black, white, ethnic, straight or LGBTQ. After two years of the toddler and the mess in front of us, we need BRAINS, DEDICATION AND TRUTH, not torture and agendas.

In other gender equality news, MSNBC recently gushed about how “the military-industrial complex is now run by women.”