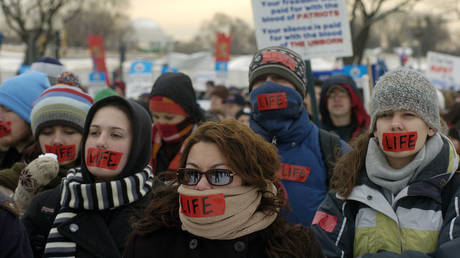 An anti-abortion box office movie has had its Twitter account restored after a temporary and unexplained suspension, which sparked outrage and fresh cries of ‘censorship’ online.

The movie titled ‘Unplanned’ follows the true story of a Planned Parenthood clinic director turned pro-life activist, and was produced by Christian production company Pure Flix. It bills itself as “exposing the truth” about the family-planning organization, which it claims is only interested in money.

Twitter suspended the movie’s account seemingly without explanation last week, one day after its official premiere, but the backlash on the social media platform was swift, with pro-life and conservative commentators publicizing the suspension and demanding answers on the blackout. After the outcry, Twitter lifted the suspension, having decided that “after further review,” the account did not actually violate any rules.

It appears the suspension could have been the result of pro-choice users repeatedly “maliciously and falsely” reporting Unplanned’s account to Twitter — but the entire thing seems to have backfired, as the movie’s follower count shot up dramatically to over 100,000 soon after its account was restored.

I suppose you could say that effect was

But the saga continued, as Twitter users then suddenly began reporting that they had mysteriously been unfollowed from the movie’s account — and some claimed that they were not able to follow it at all. However, the account now has more than 200,000 followers.

I was following @UnplannedMovie and now I am not tho i did not change anything. BTW, recently I have liked one of your tweets and 5 secs later…no like showing. Vanished. Twitter is trying to mess with ppls impressions of popularity and agreement with ppl, statements,events.

Hey @jack – why aren’t you letting me follow @UnplannedMovie ? I’ve tried eight times to support my friend @AbbyJohnson and @Twitter won’t let me. Others are having the same issue. Please correct this. Thank you.

Are you following the Unplanned Movie Twitter saga? You should. Twitter stopping people following the movies ac. More elitist push back on opinions they don’t like. I doubt you will read this story in the mainstream media pic.twitter.com/GAQntVczEv

The movie has been lauded by conservative media and panned by liberal media as pro-life “propaganda.” Twitter’s action against the movie didn’t seem to bother mainstream media though, with few major outlets reporting on the weekend-long Twitter drama.

Major television networks in the US, including the Hallmark Channel and the USA Network, also refused to run the movie’s ads — and it was given an R rating by the Motion Picture Association of America (MPAA) due to some graphic abortion scenes. The movie producers called the decision “deeply flawed” given that films featuring “graphic sex, violence, degradation, murder and mayhem” have been given PG-13 ratings.

Despite the pushback, the movie had a surprisingly strong opening weekend, pulling in $6.1 million and landing in fifth place.

Despite Twitter suspending our account, TV networks refusing to sell ad time to us, a targeted R rating from the MPAA, and myriad of blockages attempting to undermine our film, we pushed through!

Can we get our message to @realDonaldTrump & @DonaldJTrumpJr & @VP RT 🇺🇸

Film @UnplannedMovie opens this weekend. Planned Barrenhood and media doing all they can to keep you from seeing. PP is a money-making baby killing machine that exploits vulnerable women and profits off of them. See film. America deserves the truth!

But of course we should expect darts & arrows thrown at “Unplanned” because it’s a great movie full of shocking truth & light. The darkness within today’s anti-child movement is exposed more clearly everyday. https://t.co/5OCvOsrC0l