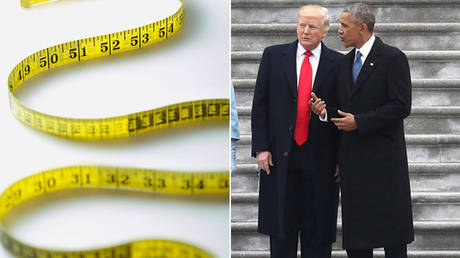 Eagle-eyed netizens armed themselves with measuring tape after the much-anticipated results of President Donald Trump’s medical exam were released. Twitter has been flooded with memes and mockery – this time over Trump’s size.

While there are only a few minor differences between Trump’s check-up results this year and last year, the release of the records on Thursday was enough to whip some on Twitter into a frenzy.


The exam, performed by the president’s physician Sean P. Conley on February 8, showed that Trump “remains in very good health overall” and that, save for piling on four pounds, nothing much has changed for him health-wise in a year.

Height has not either. Just like in January last year, Trump was measured at 6’3″, which makes him officially two inches taller than his predecessor Barack Obama. However, much like the previous year, many have cast doubt on the measurement.

Believe your lying eyes. The man’s a sidecar full of suet. https://t.co/nJztjHyxuq

Commentators on Twitter dusted off photos of Trump and Obama standing side by side at the inauguration, in which the current commander-in-chief appears to be the same height or shorter, depending on the angle.

The most inquisitive compared Trump with other world leaders and his former Republican primary challengers, who, at least on paper, should be shorter.

Again, Trump lies about his height.

Here are some comparisons in the excellent photos below:

Trump’s actual height remains a source of rampant speculation. It was reported that his driver’s license, issued in May 2012 and unearthed last year, stated that he was 6ft 2in – and, thus, still should be, unless he has grown since then (which not many people in their 70s do).

The rekindled debate over Trump’s measurements prompted some to compare his weight and height to that of professional NFL athletes, for instance to that of the New England Patriots’ Kyle Van Noy, who happens to have the same physical parameters, albeit a strikingly different frame.

According to the White House physician, Donald Trump is 6’3 and weighs 243 lbs.

According to Trump’s physician the President and former Defensive Player of the Year, Khalil Mack are the same height and weight (6’3 243) pic.twitter.com/cfNvVcONV5

Trump’s weight gain has made him technically obese, with a BMI just over 30. This fact has been picked up on by his critics, provoking excitement among some of them.

However, many saw the ridicule coming Trump’s way because of his appearance as inappropriate, accusing those reading between the numbers of fat shaming.

Why are you fat shaming Trump? It’s 2019 and people shouldn’t be judged by their weight.

Some argued that slamming Trump not because of his policies, but because of how he looks is an example of liberal hypocrisy.

Can’t wait for all the snowflakes to revel in Trump being labeled “obese”, after crying about fat shaming and thin privilege. https://t.co/vJxPvVJg2X

Trump’s health remains a regular line of attack for his opponents, who suggest that he is either physically or mentally unfit to hold the office. Armchair ‘medical professionals’ and mainstream media pundits have fanned rumors he is suffering from a range of potentially disqualifying mental issues, such as early-stage dementia or another rapidly progressing degenerative mental disease. This last year’s physical exam, however, found that Trump was in “excellent” mental shape and had “absolutely no cognitive or mental issues whatsoever.” The inclusion of the cognitive test was requested by Trump himself, but it did little to placate those who slammed the record as being fabricated.