Ahead of midterm elections, Twitter has reminded Americans that democracy is still under threat by releasing millions of tweets by pesky Russians (and Iranians) from the past decade. How do they know? Well, that’s the question.

Twitter says the database released on Wednesday contains an archive of tweets and media “we believe resulted from potentially state-backed information operations.” Translation: dastardly Russian (and some Iranian!) trolls looking to corrupt the sanctity of American elections.

Some ten million posts – dating back to 2009 – come from 3,841 accounts Twitter thinks are highly likely connected to the Russian Internet Research Agency (IRA), and from 770 supposedly “backed by” Iran. Most of the content dealt with American politics, weighing in on both sides of the widening left-right divide in the US. Posts about Black Lives Matter activism: Russian bots. Gun rights? Russian bots. NFL players kneeling for the national anthem? Yep, Russian bots. 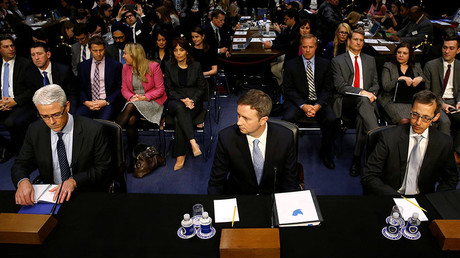 Twitter did not say exactly how it came to “believe” these offending tweets originated from an alleged Russian troll-farm, but Congressional testimony from its Acting General Counsel Sean J. Edgett last year may shed some light on the company’s investigative methods.

Logged into Twitter during a layover in Moscow, Bulgaria or Belarus? Tweeted the name of that lovely little cafe in Belgrade? Congratulations, you’re now “Russian-linked.”

Twitter’s broad-brushstroke approach has embarrassed the company before. In a purge of accounts suspended for ‘Russian interference’ in the 2016 election, one Black activist from Atlanta, Georgia, found herself implicated and banned along with 200 others.

“This whole suppression of voices in using this Russian scare tactic is just way too far,” the activist, who lives in Atlanta and has never been to Russia, or even met a real-life Russian, told RT at the time. “I’m not a fake person. I’m not a bot, whatever these people are trying to imply. It’s driving me batty and I’m looking to sue.”

It’s so funny to read in Twitter that Russian bots are the cause of any problem. Even the dismissal of Chuck Wendig is their work.

(I hope after this tweet I will not become one of that’s creepy bots, just cause I live in Russia?😊)

When digging for Cyrillic characters and snooping for Russian logins wasn’t enough, Twitter enlisted the help of the professional troll-hunters at the Digital Forensics Lab, who pored over the database before its release this week. An offshoot of the Atlantic Council, a NATO-backed think tank, the DFL has previously aided Facebook in its “arms race” against “foreign actors” and misinformation, and spends its time poring over RT articles looking for evidence of nefarious Kremlin plots and schemes.

The Atlantic Council’s funding comes from the US and foreign governments, as well as corporate and individual interests. These include weapons makers Lockheed Martin, Raytheon, and Boeing, wealthy private backers such as Ukraine’s Viktor Pinchuk and Saudi billionaire Bahaa Hariri, and state institutions such as the National Endowment for Democracy, the UK Foreign Office, and the US Army.

It is little wonder, then, that its partnership with Facebook has seen alternative news and political commentary, antiwar, and police brutality activism pages banned and in some cases abruptly disappeared from the platform.

Does calling me and other “Russian Bots” count as dehumanising? Twitter itself Dehumanised millions of people by de-activating their account after falsely accusing them of being bots. Is this going to be included in the new Twitter Safety policy too? https://t.co/BWS1KbDn4E

In its review of Twitter’s latest release, the Digital Forensics Lab says the bots were aimed at “dividing polarized online communities in the US, unifying support for Russia’s international interests, and breaking down trust in US institutions.” Any and all topics were fair game, and while the DFL says the operation was aimed at keeping Hillary Clinton out of the White House, it also says the bots did not all support one side, even on the same issues.

The DFL did not provide any more information on how it determines what constitutes a “bot” account, but the organization’s witch-hunter in chief Ben Nimmo revealed his methodology earlier this year, when he stated that “bad grammar” is one of the many signs of the Russian bot.

The DFL did make one conclusion in its review of the database: the alleged trolls weren’t actually effective.

“There is no evidence to suggest that they triggered large-scale changes in political behavior,” the DFL wrote, “purely on the basis of their social media posts.”

So what’s the big idea? By releasing this information, Twitter can placate angry politicians who haven’t stopped blaming Russia and social media for Clinton’s defeat in 2016, while ‘Reds under the bed’ watchdogs like the DFL can claim they need more money to “safeguard our democracy” from foreign meddling. Everyone wins, except that pesky thing known as truth, and people who dared tweet opinions the gatekeepers disapprove of.