As the lawyers for Facebook, Twitter and Google were questioned by the Senate Intelligence Committee over alleged Russian interference in the 2016 election, they did their best to plumb every possible lead to “Russian accounts,” however tenuous.

Many senators were accusing the Internet giants of conspiring with Russia to “undermine” US democracy, and weren’t shy to do it in the loudest of terms.

“With the current fascist leadership of Russia enthusiastically undermining our democracy, America must defend the values that made us great and aggressively confront this espionage,” said Senator Ron Wyden (D-Oregon).

“Last year, Russia was beginning its covert influence campaign against the United States and Twitter was on the side of Russia, as opposed to the national security interests of the United States,” said Sen. Tom Cotton (R-Arkansas), calling on the social media companies to work with the CIA.

Sen. Mark Warner (D-Virginia) claimed that alleged Russian attempts to meddle in US affairs are a constant phenomenon, without offering any evidence for his claims.

“Russians have been conducting information warfare for decades,” Warner said. “They did it during the 2016 presidential campaign, and are still doing it now.”

Warner urged the social media platforms to “do more” and chastised the US government as “incapable of meeting this 21st century challenge.” He then called on fellow senators to pass his Honest Ads Act to “protect our elections from the foreign interference we all want to avoid.” 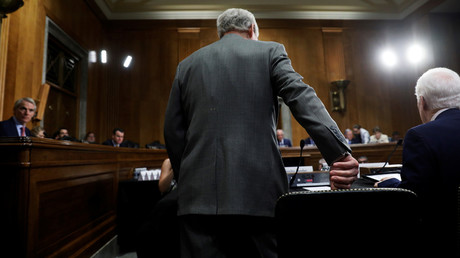 While Facebook claims to have found 3,000 advertisements purchased by 470 “inauthentic accounts,” it later conceded that 56 percent of the ads were purchased after the election.

Twitter had originally reported that it had found 201 fake accounts. After Warner expressed disappointment in the findings, Twitter raised that number to 36,746.

A key question posed by multiple lawmakers involved the criteria used by the social media companies to detect “Russian-linked” accounts.

Twitter Associate General Counsel Sean Edgett told the committee that the company’s toolbox to detects links to Russia include use of a Russian phone number, mobile carrier, email address, IP address, Cyrillic characters in one’s username, and whether one has “logged in, at any time, from Russia.”

“The most obvious one that is typically the most reliable is location information that is transmitted by the user’s browser when they use Facebook,” Stretch said, before adding, “It’s also the most manipulable.”

Senator Angus King (I-Maine) repeated allegations that Russia interfered in elections in France, Germany, Catalonia and Scotland, offering no evidence for the claims.

King also suggested looking to Eastern European politicians for advice in how to defend from Russian interference. The US has backed several “color revolutions” in Eastern Europe and the former Soviet Union, from Serbia to Ukraine.

“We have to develop that level of sophistication,” King remarked.

Another popular topic, brought up by multiple lawmakers, was the social media giants’ relationships with RT.  Last week, Twitter banned RT and Sputnik News from purchasing advertisements, after RT revealed that it declined Twitter’s pitch for a major election ad buy in 2016. For its part, Sputnik News has never purchased advertisements on Twitter.

“Do you consider RT to be a regular media organization?” asked Cotton.

Google’s Kent Walker told the committee that his company “recognizes the concerns that have been expressed about RT and its slanted coverage” but has found no violations despite carefully reviewing the content.

“We continue to look,” Walker said.

“I’m not really satisfied with that,” said Feinstein.