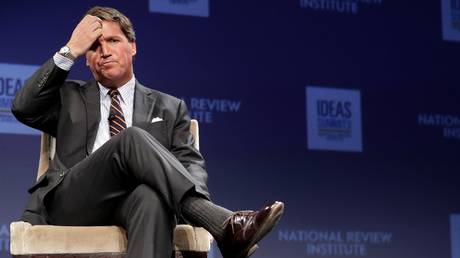 “They don’t just want to vote for this guy,” Carlson said. “They want to consume him, like a hearty stew. Every last drop of Buttigieg – yum!” Carlson said Buttigieg had replaced former Texas congressman Beto O’Rourke as a “younger, hotter candidate.”

The host apparently came off as a bit overzealous in the odd segment, and people were quick to give their take on it.

“If I was Pete Buttigieg, I would go straight to the local police station to get a restraining order against creepy @TuckerCarlson ASAP,” one user tweeted.

Another person had some practical advice for the TV host.

“Use a spoon, @TuckerCarlson, you’ll want to get EVERY DROP.”

“They don’t just want to vote for this guy. They want to consume him, like a hearty stew. Every last drop of Buttigieg. Yum!”
— Tucker Carlson

My, my… sounds like somebody’s got it pretty bad for Mayor Pete… 😂

Buttigieg, the South Bend, Indiana mayor, is a rising star among the Democratic Party’s 2020 presidential lineup, garnering a wave of media attention in recent weeks. He officially launched his campaign on Sunday.