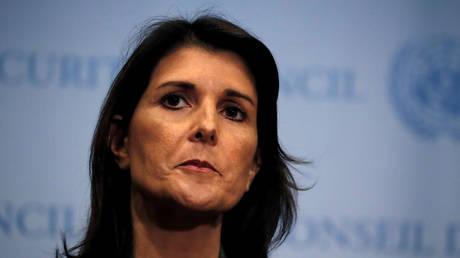 Nikki Haley’s next step after UN Ambassador could be with Boeing, after the aerospace and defense giant announced on Tuesday that it has nominated her to join its board of directors.

“Boeing will benefit greatly from her broad perspectives and combined diplomatic, government and business experience to help achieve our aspiration to be the best in aerospace and a global industrial champion,” it said in a statement. Commenting on the move, Haley described it as “an honor.”


The news was met with amusement and pointed remarks online, with Twitter commenters calling the move “swampy” and saying it was an example of politics and corporations being closely tied, and of a broken political system. Boeing has close ties with the US government, with its CEO Dennis Muilenburg serving on the Export Council, while acting US Defense Secretary Pat Shanahan is a former senior Boeing executive of more than three decades, Reuters reports.

Of course another political appointee, this is another of the broken system

Lmao the corruption is open and blatant now. GOP gives @Boeing money and the GOP member gets job! Easy does it

Why would Boeing hire anyone from treasonous Trump’s administration, oh wait so they can curry favor with transportation approvals or contracts for planes?

Others joked about Haley’s non-existent experience in the aerospace and defense industry.

It’s nice that they can take advantage of her extensive experience in the aerospace industry.

However, Haley forged positive relations with Boeing during her time as North Carolina governor. In 2013, she helped the company set up new facilities in the state, including the complex where Boeing builds its 787 Dreamliner and employs about 7,000 workers.

When she resigned from the UN ambassador role in October, Haley said she would be taking a “step up” into the private sector. Since then, she has been making $200,000 per domestic speaking appearance, CNBC reports.

Congrats to @NikkiHaley on having her incessant warmongering pay off so quickly & lucratively. And congrats to @Boeing for obtaining her influence. It is at all a problem that politicians convert their access into massive personal wealth upon leaving? https://t.co/uHKhruMBjQ

At last Nikki Haley has found a job that is really in line with her values: member of the board of directors of Boeing. https://t.co/tFrOunszgM

Haley was a staunch supporter of Israel throughout her tenure at the UN, and met with Israeli Prime Minister Benjamin Netanyahu and Defense Minister Avigdor Lieberman during her diplomatic stint. Boeing and Israel entered a “reciprocal procurement” partnership in October, with Boeing agreeing to spend billions of dollars in Israel if it wins major defense contracts.