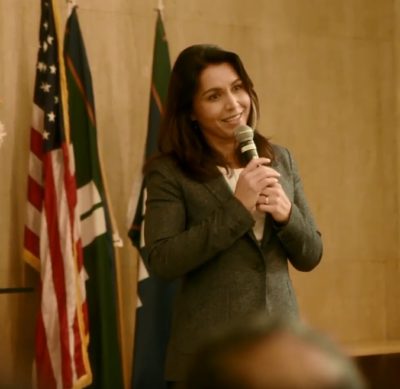 I’m running for president to be able to bring about this sea change in our foreign policy that is so necessary for us and for the world.

Tulsi Gabbard visited the San Francisco Bay Area last weekend. The 3 term Congresswoman from Hawaii is 37 years old and ethnically diverse. Remarkably, she has 15 years military experience in the US Army and National Guard as well as substantial political experience. She was elected to the Hawaii State Assembly at age 21.

What makes Gabbard really distinctive is her emphasis and approach to US foreign policy. While other candidates largely avoid the subject, Tulsi Gabbard says the issue is “central” to all other issues. She says we need to change the policy of “regime change wars” and “new cold war” with Russia and China. She advocates cooperation instead of conflict.

Gabbard said “We are at a greater risk of nuclear catastrophe than ever before in history.” She described the scare of an incoming nuclear missile attack which occurred in Hawaii last year. Even though the alert turned out to be false, the threat is real. “It should alarm every one of us here that leaders in Washington are either not paying attention, they don’t know, or they…