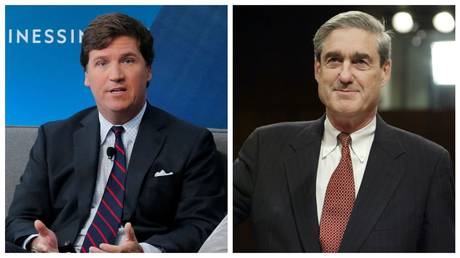 Fox host Tucker Carlson offered his take on CNN filming a surprise FBI raid on Roger Stone’s house, saying the channel has turned into the “PR arm” of Robert Mueller, “the single most powerful” – and unelected – man in the US.

In his latest monologue, the Fox anchor said it’s crucial to raise some questions before the arrest of Roger Stone – an associate of Donald Trump – fades from the headlines. Notably, it was almost entirely devoted to a CNN crew being conveniently present at the early-morning FBI raid on Stone’s Fort Lauderdale house.

“How did CNN know about a raid that was supposed to be a secret? Did they learn from [Robert] Mueller’s team?” Carlson asked. Shortly after the raid, which Carlson likened to “a military assault,” speculation began to spread that the network had an inside track with the FBI or Mueller’s team.

Also on rt.com
Stone pleads not guilty to obstruction, lying to Congress in Mueller probe


“CNN acted as the public relations arm of the Mueller investigation, as they have before,” Fox’s political commentator suggested. “The network is no longer covering [Mueller]; they’re working with [Mueller]. And you should know that as you watch it.”

Carlson was not the only one to comment on Stone’s arrest, and the way it was executed. The Feds sent more armed men to arrest the 66-year-old unarmed man than it did to kill Bin Laden in 2011, he noted.

Mueller, who is leading the Russiagate probe, “can send armed men to your home to roust you from bed at gunpoint just because he feels like it, and there’s nothing you, or anyone else, can do about it,” said Carlson.

He branded the FBI special counsel “the single most powerful person in America,” and yet “nobody voted for him… Nobody in Washington catches the irony in any of this. Mueller himself is the threat to our democracy. The most powerful man, elected by nobody.”

Also on rt.com
‘CNN defends free speech only if it’s their own speech’ – Tucker Carlson


During Trump’s campaign, Stone boasted about having connections with WikiLeaks co-founder Julian Assange, but later said it wasn’t a direct link. Instead, he said that he relied on New York radio host Randy Credico (referred to as “Person 2” in Thursday’s indictment) as a “go-between.”

The indictment says Stone lied to the House Intelligence Committee about his alleged contacts with WikiLeaks, and tried to convince another person to give false testimony.