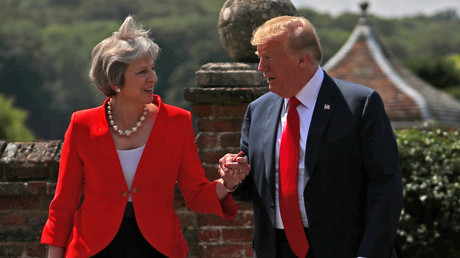 On his EU visit, US President Donald Trump lectured Germany on doing business with Russia, demanded tribute from NATO and offered advice on British politics. Many Europeans were having none of it, venting their spleen on Twitter.

Trump flew into Belgium for the NATO summit on Wednesday, then jetted to the UK for a state visit on Thursday. He is scheduled to meet with Russian President Vladimir Putin in Helsinki, Finland, on Monday.

The US leader started off the NATO summit by accusing Germany of being a “captive to Russia,” arguing that Berlin’s position within the military alliance was compromised because of its reliance on energy from Moscow. This led some journalists to accuse Trump of projecting his insecurities onto a rival, while others pointed out this dispelled claims he was soft on Russia.

.@Yamiche in Brussels: President Trump blasted his way into NATO, and for someone who is being blasted at home for being controlled by Russia, he really projected that on Germany. #AMR

The funny part is Trump has taken far more consequential actions that are averse to Russia’s interests (expelling diplomats, sending arms to Ukraine, approving sanctions, repeatedly bombing their client state) than Germany’s, but listen to US media you’d assume the exact opposite

While Trump’s comments provoked fierce reaction online, Chancellor Angela Merkel was more restrained in her response. Online commentators were in no mood for civility, with some calling for Merkel to mete out some rough justice.

I can’t be the only one who just wants to see Merkel lose it and deck Trump.

I’m getting tired of the European strategy to indulge Trump tantrums and in reply to offer – at most – acerbic ripostes. Would love to see one of them let loose. He’s not a manchild, he’s a bully. #NATO#Merkel#Macron#Trudeau

One German TV network reportedly responded by digitally replacing the US president with an image of a Trump-shaped blimp made by some British protesters.

He said, no one else said

If making culturally insensitive statements is a Trump trademark, so is declaring victory in disputes before being contradicted by the supposedly vanquished. The NATO summit produced a few such moments.

The former reality TV star has long berated NATO over military spending or lack thereof. Trump came to the summit looking to pick a fight with 24 alliance members failing to meet an agreed target of making their military budgets two percent of their GDP.

President Trump claimed he got countries to increase their defense spending, but then he says it’s still at 2 percent of GDP. Which is what it has been.

Just another big fat Trump lie. It was President Obama who negotiated in 2014 to get the #NATO countries to commit to spend 2% of their GDP by 2024. He was successful and now you want to slip in and take credit for his success. It’s your modus operandi. Look it up moron.

The point is, they were going to anyway. They have been since the Wales Summit agreement in 2014. The 2% of GDP for defense spending has a target date of 2024. Trump didn’t do shit.

READ MORE: Trump warns NATO allies US can ‘do our own thing’ if 2% spending goal not met – reports

In another seemingly off-the-cuff remark, Trump said he wanted NATO members to double their spending, to four percent of GDP. Some felt they could see the malign hand of shady defense contractors at play.

So Trump came to Brussels as an arms dealer. He wants all NATO countries to increase defense spending to 4% of GDP, which would come as welcome news to Raytheon, Lockheed & Boeing. Feeding defense corps is what NATO has been about since it became operationally obsolete in 1990. https://t.co/aTPsRkrPMs

If Trump is so upset about the rest of NATO not paying as much as he wants them to, then why doesn’t he cut the US commitment? What real world threat requires defense spending of 4% of GDP? This is about US arms sales, period. #ThursdayThoughts

UK Prime Minister Theresa May must have choked on her tea when she read Trump’s interview with The Sun on Friday morning. In a bizarre exclusive, Trump was scathing about her Brexit plan and even backed rival Boris Johnson to succeed her at 10 Downing Street. Later in the day, he insisted that the story was “fake news.” Online commentators knew who they were going to believe.

Can it be fake news when an interview is on tape? Mr. Trump why not own what you said? Unless you didn’t have any idea of what you were saying.

Trump thinks Boris Johnson would be a great Prime Minister. Why? He “obviously likes me, and says very good things about me.”

On Brexit: “I told Theresa May how to do it, but she didn’t listen to me.”

Is there any limit to this man’s childish vaniy?

There was some discussion about whether Trump should be involving himself in British domestic matters, especially after criticising Barack Obama for the same thing in 2016. At least one British politician saw nothing wrong with Trump’s “meddling,” however.

The Right, 2016: How DARE Obama say anything about Brexit? He’s not from round here & hates us because Kenya.
The Right, 2018: Here’s Trump to undermine the PM, do a racist rant about the London mayor & tell us what to do re Brexit & also let’s ask Steve Bannon what he reckons.