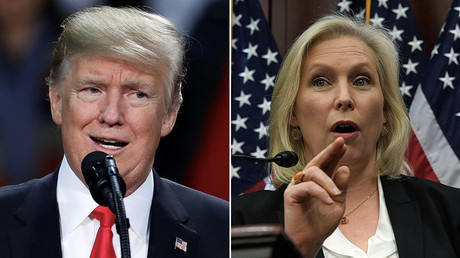 A war of words between US President Donald Trump and Senator Kirsten Gillibrand (D-New York) has left top Democrats leveling allegations of sexism against the president.

The spat was sparked after Gillibrand joined a handful Democrat senators and Bernie Sanders in calling for Trump to resign over allegations of sexual assault.

“President Trump has committed assault, according to these women, and those are very credible allegations of misconduct and criminal activity, and he should be fully investigated and he should resign,” Gillibrand said on CNN.

The comments drew a harsh response from Trump, who tweeted that Gillibrand used to “beg” him for campaign contributions before he moved into politics himself. He also cryptically added that she would “do anything for them.”

Lightweight Senator Kirsten Gillibrand, a total flunky for Chuck Schumer and someone who would come to my office “begging” for campaign contributions not so long ago (and would do anything for them), is now in the ring fighting against Trump. Very disloyal to Bill & Crooked-USED!

The feud escalated when Gillibrand took to Trump’s favorite medium to accuse him of bringing shame on the Oval Office.

You cannot silence me or the millions of women who have gotten off the sidelines to speak out about the unfitness and shame you have brought to the Oval Office. https://t.co/UbQZqubXZv

She later shared video footage of a press conference in which she described Trump’s tweets as a “sexist smear.”

“It was a sexist smear attempting to silence my voice and I will not be silenced on this issue. Neither will the women who stood up to the president yesterday and neither will the millions of women who have been marching since the Women’s March to stand up against policies they don’t agree with,” she said.

Several of her fellow Democrats in the Senate also leapt on the president’s words to accuse him of sexism. Sen. Richard Blumenthal (D-Connecticut) described them as “sexist slurs” while Elizabeth Warren (D-Massachusetts) said he was trying to “slut-shame” Gillibrand.

Warren’s unusual choice of language in defending her colleague raised many eyebrows. Perhaps the most cutting analysis of her choice of words came from New York Post editor Seth Mandel, who said Warren was suggesting that Gillibrand “sleeps around for campaign donations.”

Trump supporters weren’t buying the Democrats’ argument, instead saying the president was simply calling out Gillibrand for hypocrisy.

Fauxahontas Warren jumped to “trump slut-shaming Gillibrand” when there is zero part of trumps tweet that even does that. He simply called out Kirsten for being a hypocrite.

“There’s no way this is sexist at all,” White House press secretary Sarah Huckabee Sanders told reporters on Tuesday afternoon. “Your mind is in the gutter if you’ve read it that way.”

Trump has used the same language about men, talking about corruption in the political system, Huckabee Sanders pointed out.

According to Open Secrets, a nonprofit that tracks campaign contributions, Trump has donated $5,850 to Gillibrand in the past. In November, former Hillary Clinton aide Philippe Reines called Gillibrand a “hypocrite” and disloyal to the Clintons, after she said Bill Clinton should have resigned as president due to his affair with White House intern Monica Lewinsky.