Cohen appeared in a federal court in Manhattan on Tuesday afternoon to offer a guilty plea on several charges filed by prosecutors in the Southern District of New York.

Cohen said that he made the campaign contribution “at the direction of a candidate for federal office,” meaning Trump. The payments were made “for principal purpose of influencing [the 2016 presidential] election,” according to Reuters. 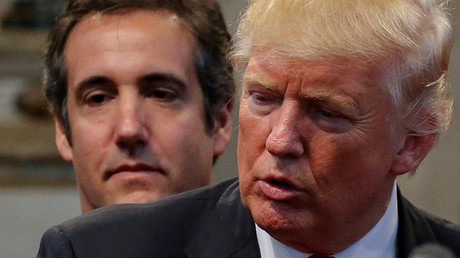 The charges resulted from a federal investigation of Cohen over payments to Stephanie Clifford, also known as Stormy Daniels, in October 2016. The adult film actress was threatening to make public her alleged affair with Trump from 2006, and Cohen was accused of violating campaign finance laws by paying her $130,000 worth of hush money.

The FBI raided Cohen’s office in April, seizing all of his documents. A federal judge ruled that less than one percent of the files were protected by attorney-client privilege.

Cohen’s plea deal with the prosecutors will reportedly include a substantial monetary fine and jail time. He could face over five years in prison if the deal is approved by the judge.

Trump parted ways with Cohen in June. He is now being represented by former New York City Mayor Rudy Giuliani.

Media critical of Trump have speculated for months that Cohen would “turn” on his former client, which time and again turned out not to be the case. Last month, there was breathless reporting that Cohen had secretly taped a discussion with Trump over hush money to another woman, former Playboy model Karen McDougal. Giuliani said the tape would prove Trump did nothing wrong.