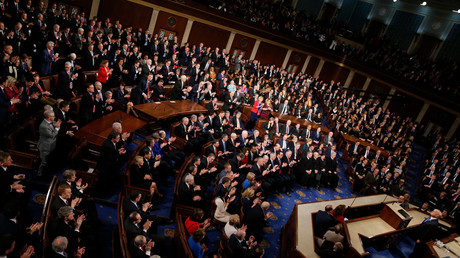 It was billed as a speech that would unite all Americans, but even with memorable lines, President Donald Trump’s first State of the Union address seemed to only sharpen the contrasts between the political right and left.

When Trump praised his special guest, 12-year-old Preston Sharp, for helping to place 40,000 American flags on the graves of dead soldiers, the president subtly socked the NFL players and other athletes who have “taken a knee” during the US national anthem, most often to protest police abuse.

Preston’s devotion, Trump said, reminds us of “why we proudly stand for the national anthem.” The line instantly brought Republican lawmakers to their feet for an extensive standing ovation, while only a sparse few Democrats got up to join in briefly before sitting back down amid the applause.

Disgusting Democrats. They cannot be allowed near power #SOTU

Hmm. National anthem line makes me wonder about the sincerity of his calls for unity. #SOTU

Trump boasted of eliminating more regulations than “any administration in the history of our country,” and ending the “war on American energy” and “beautiful, clean coal.” But not every American was so proud, particularly with the president’s word choices.

Without dwelling on his failure to repeal Obamacare, Trump shifted to Big Pharma and the FDA, taking on drug prices and access to experimental treatments for the terminally ill. He brazenly promised that “[drug] prices will come down, substantially. Watch.” But many doubt his ability to carry through on the vow.

Weird that @realDonaldTrump is claiming that the prices of prescription drugs will come down when he picked a big pharma executive to be Secretary of HHS.

The same guy who raised the price of insulin by more than 1000%. #SOTU

I wonder if Trump knows the “strong intellectual property” rules he wants to enforce on trade are responsible for high drug prices.

The president’s call for Congress to produce a $1.5 trillion infrastructure bill, which he said is “desperately” needed, was roundly criticized, despite his giving no policy details. Trump did call for private partnerships and a streamlined permitting process, aiming for a maximum of two years.

“Together we can reclaim our great building heritage,” Trump said. But the response was tepid from Democrats, a fall from last year when they had expressed some constrained optimism over a bipartisan infrastructure deal, as opposed to issues like Obamacare and tax cuts.

America’s future isn’t stronger when @realDonaldTrump gives away gigantic tax breaks to billionaires & giant corporations so there’s no money for education, infrastructure, & the tools we need to succeed.

Too bad we continue to spend so much money RE-BUILDING the cities we’ve blown up in the Middle East! That money would have been better spent building our own infrastructure! #SOTU

It was inevitable that Trump would bring up the hottest topic on Capitol Hill – immigration reform. However, what Trump might call an olive branch to the Democrats has only been interpreted as a poison pill.

While “the US is a compassionate nation,” Trump said, he also insisted that his concern was for “America’s children” and its forgotten communities. “I want our poor to have their chance to rise.”

“Americans are dreamers too,” he said, a line that drew opposite reactions from conservatives and liberals, despite Trump’s ostensible intentions. “Let’s come together, set politics aside, and finally get the job done.”

“Americans are dreamers, too” – designed to make Americans think Dreamers are murderers, should be remembered as one of the most disgusting lines in the history of #SOTU speeches.

Even when it came to the issue of nuclear proliferation, Trump didn’t manage to win over the hearts and minds that he needs to get much of his agenda through Congress.

“Perhaps someday in the future there will be a magical moment when the countries of the world will get together to eliminate their nuclear weapons. Unfortunately, we are not there yet, sadly,” Trump said, after referencing North Korea.

Trump talks about the need to eliminate nuclear weapons, but he wants to tear up the Iran deal, which has stopped that country’s development in its tracks.

#Trump wants to borrow more money from China, so that we can make our nuclear arsenal even more powerful, so as to deter China from attacking us. China does not need to attack us to harm our economy. It just needs to stop lending us money.

Diplomacy is the only way to rein in #NorthKorea’s nuclear program. President Trump’s reckless saber-rattling has only worsened this crisis. We need to de-escalate the rhetoric before this spirals out of control. #SOTU

Outside of the reliable Republican cheers in Congress, responses were no more favorable to the president when he credited “the coalition” with liberating “nearly 100 percent” of the territory held by “these killers” in Islamic State (IS, formerly ISIS).

While he’s taking a measure of credit for ISIS’ defeat, Trump isn’t naming the three big players/beneficiaries in “the coalition to defeat ISIS:” Russia, Iran and Assad’s homicidal regime in Syria