The White House says US President Donald Trump will cut his trip to the G7 summit short, skipping a climate change session while staying for one on women empowerment. Trump is increasingly at odds with the other group members.

As Trump was about to depart for the summit, which will take place on Friday and Saturday in Charlevoix, Canada, White House Press Secretary Sarah Huckabee Sanders announced that he would leave the venue for Singapore at 10:30 am on Saturday, while the summit will continue until 5:00 pm.

“The President will travel directly to Singapore from Canada in anticipation of his upcoming meeting with North Korea’s leader Kim Jong-un Tuesday,” Huckabee Sanders said on Thursday, adding that Trump’s seat at the world leaders’ table will be taken by his economic affairs aide, Everett Eissenstat. 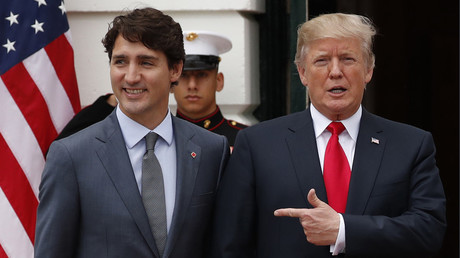 Huckabee Sanders did not give any clue as to why Trump will be wrapping up his visit so hastily. Whatever the reason, it’s unlikely to be the preparations for the summit with Kim, since Trump previously said he would only need to bring his attitude.

Trump’s schedule means that while he will sit through the G-7 working session on “gender equality and women’s empowerment,” but the session on “climate change and clean energy” will kick off without him. The session starts at 10:45 am, when Trump will supposedly be en route to Singapore.

Trump’s long-time opposition to all issues relating to climate change and its effects on the environment is well-known. The US leader loathes the previous administration for its self-restrictive environmental policy, and last June he pulled the US out of the 2015 Paris accords on climate change mitigation, arguing it put the US economy “at a permanent disadvantage.”

The move has triggered widespread outcry, drawing anger from many European leaders. French President Emmanuel Macron has emerged as one of the harshest critics, calling on Trump in April to “make our planet great again” by rejoining the agreement.

Grievances over climate change are, however, only a small part of Trump’s troubles with the countries comprising the group – Canada, France, the UK, Germany, Italy and Japan.

A 25 percent tariff on steel and 10 percent tariff on aluminum imports that Trump slapped on Canada, Mexico and the EU continue to sour relations between the allies, with both Canadian Prime Minister Justin Trudeau and Macron vowing to raise the issue with Trump at the summit. In the run-up, Macron struck an unprecedentedly hostile tone against Trump, suggesting that if the US President enjoys being an outcast, the G7 can be easily turned into the G6.

“Maybe the American president doesn’t care about being isolated today, but we don’t mind being six, if need be,” he said on Thursday.

The host of the summit, Canadian Prime Minister Justin Trudeau, also pledged to fight the tariffs, calling Trump’s rationale “ridiculous” and threatening a tit-for-tat response that will see Canada imposing up to $16.6 billion worth of import tariffs on the US.

Firing back, Trump unloaded on both Trudeau and Macron on Twitter, accusing their countries of “charging the US massive tariffs” and impeding the import of American goods with “non-monetary barriers.” Taking aim at the Canadian PM in particular, Trump called him “indignant” for bringing up the history of the US-Canada relations.

While Trump is scheduled to have bilateral talks with both Macron and Trudeau, despite an apparent cool-down in relations, a meeting with British Prime Minister Theresa May is not even on Trump’s agenda, the UK officials revealed.

Despite the UK-US relations being referred to as “special,” Trump has yet to visit the UK, with a visit being scheduled for July 13. In January, Trump cancelled his planned visit to London over his dissatisfaction with the new US Embassy compound in south London, which Trump said is not worth the cost.