Countering charges of fearmongering stemming from his description of Central American migrant caravans as “invasion,” President Trump shared his plans to house the newcomers in “very nice” tent cities until their cases are heard.

Trump told Fox News he plans to build tent cities to hold the thousands of Central American asylum-seekers currently trekking through Mexico on their way to the US border. While the tents will be “very nice” – everything Trump builds is, in his mind – he hopes that holding the migrants in these tent cities until their asylum hearings will deter additional caravans from making the crossing. 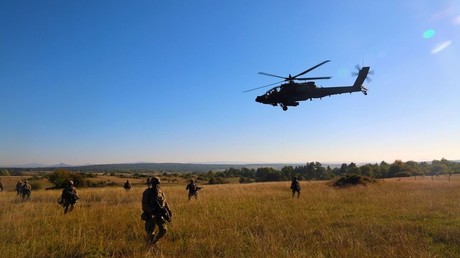 Current practice, derided by Trump and others as “catch and release,” allows asylum-seekers to stay in the US until their hearings, which can be years after they cross the border given the huge backlog of immigration cases.

Many new arrivals, understandably, never turn up for the hearing, having successfully blended into American society and not wishing to risk being turned back to their country of origin. Restricting them to tent cities – no matter how “nice” – ensures they will be present at their hearing, where – according to Fox News host Laura Ingraham – 80 percent will be sent home.

While the migrant caravans are still weeks away from the border, Trump has made headlines with his decision to send 5,200 troops and dozens of “air assets” to the US-Mexico border as part of “Operation Faithful Patriot.”

The military units will stake out 26 crossing points across California, Arizona, and Texas and await the arrival of the two caravans. They join over 2,000 National Guard personnel already guarding the border and will additionally construct fences and anti-vehicles in an effort to “harden” the border against the migrant “invasion.”

In a Department of Defense press conference on Monday, US Customs and Border Protection commissioner Kevin McAleenan urged migrants fleeing violence to accept Mexico’s offer of asylum and employment authorization within its borders and cease movement northward, admonishing those seeking employment in the US to return to their homes and apply for the proper documentation.