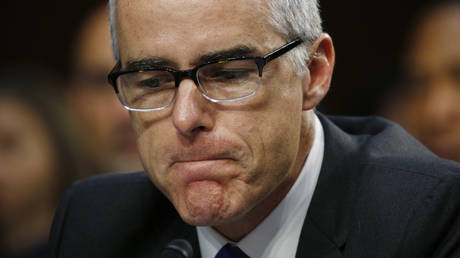 President Trump has lashed out at former acting FBI Director Andrew McCabe, after McCabe said he investigated Trump out of concern the case might “vanish.” McCabe also revealed Justice Department plans to remove Trump from office.

“Disgraced FBI Acting Director Andrew McCabe pretends to be a ‘poor little Angel’ when in fact he was a big part of the Crooked Hillary Scandal & the Russia Hoax,” Trump tweeted on Wednesday. “McCabe is a disgrace to the FBI and a disgrace to our Country. MAKE AMERICA GREAT AGAIN!”

Disgraced FBI Acting Director Andrew McCabe pretends to be a “poor little Angel” when in fact he was a big part of the Crooked Hillary Scandal & the Russia Hoax – a puppet for Leakin’ James Comey. I.G. report on McCabe was devastating. Part of “insurance policy” in case I won….

….Many of the top FBI brass were fired, forced to leave, or left. McCabe’s wife received BIG DOLLARS from Clinton people for her campaign – he gave Hillary a pass. McCabe is a disgrace to the FBI and a disgrace to our Country. MAKE AMERICA GREAT AGAIN!

Trump savaged McCabe for his handling of the ‘Russiagate’ investigation, branded a “witch hunt” by the president. A report by the Justice Department’s Inspector General last year found that the FBI acted improperly during the investigation. McCabe, according to text messages examined by the IG, discussed developing an “insurance policy” against Trump with two other FBI employees in 2016.

Trump described the message at the time as “treason,” and said it laid bare an FBI plot to work against him once elected.

The president also accused McCabe of giving “Hillary a pass,” after the agency cleared Hillary Clinton of wrongdoing in its investigation into her email misuse, overseen by McCabe.

In her 2015 campaign for Virginia’s state Senate, McCabe’s wife Jill had taken donations from Terry McAuliffe, a prominent Virginia Democrat “with long-standing ties to Bill and Hillary Clinton.” McCabe allegedly leaked information to the press about an FBI investigation into the Clinton Foundation, to deflect attention from his own ties with the Clinton family and push back against the narrative that he was therefore impartial.

Although referencing old events, Trump’s latest attack on McCabe comes as the former FBI #2 embarks on a tour to promote his new book. Titled ‘The Threat,’ the book is a passionate paean to the three-letter agency and a diatribe against Trump.

In an interview with CBS, McCabe said Trump’s firing of then-FBI Director James Comey in 2017 prompted McCabe to open an investigation into Trump as quickly as possible.

.@ScottPelley on what McCabe told @60Minutes: “There were meetings at the Justice Department at which it was discussed whether the vice president and a majority of the cabinet could be brought together to remove the president of the United States under the 25th Amendment.” pic.twitter.com/iVAyrEV4MF

“I was very concerned that I was able to put the Russia case on absolutely solid ground, in an indelible fashion,” McCabe told CBS’ Scott Pelley, in an interview due to air on Sunday. “That were I removed quickly, or reassigned or fired, that the case could not be closed or vanish in the night without a trace.”

McCabe did not explain the agency’s rationale for opening the investigation, beyond unsubstantiated rumors of “collusion.” He did not present any new evidence to back up the oft-repeated but still-unproven accusation.

Instead, Trump himself seemed to be the problem. Pelley said that McCabe described panic at FBI headquarters after Comey’s firing, as “the highest levels of American law enforcement were trying to figure out what to do with the president.”

Among the ideas circulated was that Deputy Attorney General Rod Rosenstein would wear a wire to surreptitiously record the president, gathering evidence that he was unfit for office, and triggering his eventual removal under the 25th Amendment. The New York Times reported this plan last year, citing an anonymous cabinet member, but Rosenstein dismissed the story as false.

Now, McCabe told Pelley that the plan was real. Rosenstein came up with the idea himself, and “it was so serious that he took it to the lawyers at the FBI to discuss it,” Pelley said.

Let that sink in

It’s staggering that McCabe and CBS clearly think this is a bad look for Trump and not the FBI.

“Things were so bad that we at the FBI tried to take out the President.”

The top law enforcement officials in the country conspired to overthrow the elected president, thereby effectively overriding the expressed will of voters. If that happened in Uganda or somewhere, US media would be declaring a thwarted coup attempt and breakdown of society

McCabe’s investigation was handed over to Special Counsel Robert Mueller eight days after Comey’s firing and has been ongoing since. Over a year later, the investigation has not found any evidence of collusion between the Trump campaign and Russia, and is reportedly close to wrapping up.

McCabe himself was fired by then-Attorney General Jeff Sessions last March, after the Inspector General’s report concluded he lied to FBI agents about his disclosures to the press regarding the Clinton Foundation investigation.