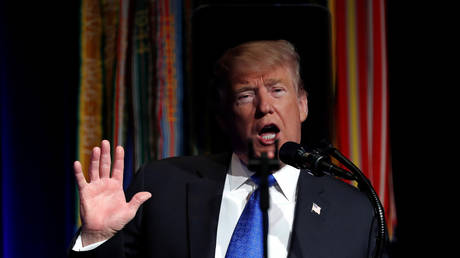 In a bid to end the government shutdown, the US President Donald Trump is expected to make an offer to lure the Democrats back into negotiations, the US media say, adding that it could involve softening his stance on migration.

The announcement is expected at 4pm EST on Saturday. Although no official comments about his plans were made, Axios reported that the president could offer extended protections for the Deferred Action for Childhood Arrivals (DACA) as part of the so-called BRIDGE Act.

I will be making a major announcement concerning the Humanitarian Crisis on our Southern Border, and the Shutdown, tomorrow afternoon at 3 P.M., live from the @WhiteHouse.

The bipartisan bill, known as the BRIDGE Act, provides temporary protection from deportation for three years and a work authorization for some 750,000 young adults, and some other undocumented youth brought to the US as children and living there at least since 2007 under certain conditions.

Another offer might be an extended stay permit for Temporary Protected Status (TPS) holders, according to Axios. At the same time, CNN reported, citing a senior administration official, that Trump still would not give up on his demands for a border wall, which has been a stumbling block in the negotiations between the White House and the Democrats in the Congress.


Meanwhile, the government shutdown the US is facing has become the longest in its history as it entered its fifth week. Trump wants $5.6 billion and no less for the wall project, which was his campaign promise, while the Democrats don’t seem willing to budge, as almost a million federal workers are missing their paychecks.