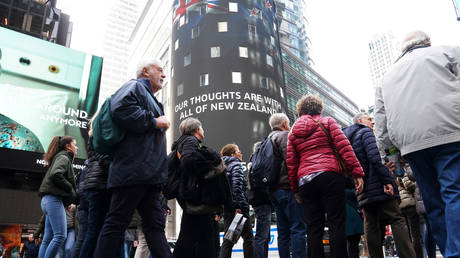 After a gunman cut down 49 worshippers at two New Zealand mosques, multiple commentators have blamed US President Donald Trump for the violence. Trump himself has condemned the killings.

“We hold you responsible for this growing anti-Muslim sentiment in the country and in Europe,” Council on American-Islamic Relations (CAIR) leader Nihad Awad said at a press conference on Friday.

Alleged perpetrator Brenton Tarrant live-streamed his shooting rampage on Facebook, and can be seen stalking from room to room, executing Muslims in their place of worship. Before his killing spree began, Tarrant reportedly released a rambling 70-page ‘manifesto’, blending internet memes with calls for a race war between whites and Muslim “invaders.”

Tarrant mentioned Trump by name, calling him a “symbol of renewed white identity and common purpose,” but rubbishing his abilities as a “policy maker and leader.”

Trump condemned the attacks, offering “warmest sympathy and best wishes” to the people of New Zealand, but downplayed the idea that white supremacy is a growing threat worldwide.

Daily reminder that we have a **Muslim Ban** in this country made out of the President’s hostility to Muslim people w/ little-to-no supporting evidence, and a Republican Party that tolerates it.

There is so much work to do. Repealing the Ban is square 1.https://t.co/dqrCsedMrt

CNN contributor Dan Pfeiffer said that Trump had “enabled and empowered” white nationalism, while a host of commentators and celebrities roasted the president for not coming out strongly enough against white supremacy.

This is so important. Trump has enabled and empowered a lot of these voices, but it didn’t start when he won and won’t end when he is gone (soon hopefully)

Did not condemn white supremacy

He would have condemned ‘radical Islamic terrorism’ if it were Muslims shooting up churches instead of white supremacists shooting up mosques.#ChristChurch

This mass murderer’s manifesto invoked Trump as his hero. Trump is knowingly inspiring racial hatred and violence. And he has begun linking such talk to what’ll happen if we dare to remove or replace him — even at the polls. Like the dictators he admires.https://t.co/nlprn76HSo

Even in the face of mass murder, you are unwilling to condemn white supremacy. The shooter, your fan, thinks you are “a symbol of renewed white identity.” “Warmest sympathy and best wishes” do not begin to address the hatred you have unleashed.

Trump has faced similar criticism before, most notably for his muted response to white nationalist protests in Charlottesville, Virginia in 2017. The Charlottesville rally made headlines after self-described white supremacist James Alex Fields Jr. plowed his car into a crowd of left-wing protesters, killing one.

In his manifesto, Tarrant explicitly stated that he wanted to bait the American left and right into attacking each other. However, some commentators weren’t falling for the ruse.

Don’t you get it?

I’m not playing his game

The massacre occurred in New Zealand, but his stated intention was to influence the US. He didn’t name any NZ figures. Instead he focused on Americans, like Candace Owens and Trump. Bizarre (yet effective) erasure of geographic boundaries afforded by the immediacy of social media

Others blasted CAIR for using “massacres to try and settle personal vendettas.”

Islamists and terrorist organisations such as CAIR are using the NZ attack to blame all their critics, even pewdiepie, the Jews, the CIA, etc. The truth is that every victim of the attack hated CAIR for their agenda of terror. Terrorist CAIR has no right to speak.

Tarrant’s manifesto was littered with internet memes and in-jokes from claims of being radicalized by black conservative activist Candace Owens to the internet-famous ‘Navy Seal copypasta’ meme and reference to YouTube star PewDiePie. He also mentioned “Spyro the dragon” and “Fortnite” as inspiration for acts of violence, although in a mocking tone.