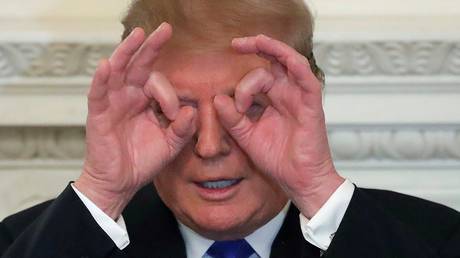 Describing his relationship with Chinese leader Xi Jinping, US President Donald Trump resorted to pantomime and stereotypes, including a “glasses” gesture that left some US officials laughing but his critics not amused.

“He’s got 10 people standing behind him. Everyone is central casting. Central casting. Glasses, pad, boom,” Trump told a meeting of US governors at the White House on Monday, describing the meeting with the Chinese leader in which he intervened for the release of three US basketball players detained for shoplifting.

“He’s got 10 people standing behind him. Every one is central casting. Central casting. Glasses, pad, boom. … And I said, ‘It would be a great thing if you could possibly let them out.’ And he goes, ‘So be it, they’re out.’” pic.twitter.com/DZwfmd9AYJ

Trump was referring to the November 2017 incident, when three UCLA players were arrested in Hangzhou. The US president was meeting with his Chinese counterpart at the time, and was later thanked by the trio for personally negotiating their release.

The “glasses” gesture, however, definitely raised some eyebrows with reporters, some of whom were quick to denounce the president as racist.

JFC – when does this jackhole just pull his eyes down in a slant and start singing ‘Chin-Chong Chinaman’? pic.twitter.com/6B8HZiBQyC

Others were confused by his use of “central casting,” which is a movie industry term to describe extras that fit the stereotype.

He uses the phrase “ out of central casting” which refers to Central Casting, a California casting company for extras in film and tv. It means they conform to well established stereotypes or character traits for a group.