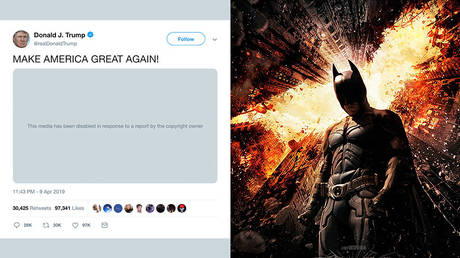 US President Donald Trump’s 2020 re-election campaign has floundered at the first hurdle after a newly-minted hype video was taken down following a copyright strike by Warner Brothers.

“First they ignore you, then they laugh at you, then they call you racist. Donald J. Trump. Your vote proved them all wrong,” read the text of Trump’s DOA campaign video which was taken down by Twitter in a matter of hours following a copyright claim by Warner Bros for the use of track ‘Why do we fall?’ from Christopher Nolan’s 2012 film, The Dark Knight Rises, which was scored by legendary composer Hans Zimmer.

“The use of Warner Bros.’ score from The Dark Knight Rises in the campaign video was unauthorized. We are working through the appropriate legal channels to have it removed,” the company said in a statement.

Homie got legit copyright claimed. Dude doesn’t even know the rules, and people want four more years of this guy?

Hell yes! I finally became a villain in the bizzaro underworld of the @realDonaldTrump . I can’t say that I understand what I’m doing in it, but I seem to have a high disapproval rating from the President. Hmmm, cool. Hey, do I get residuals from this movie? https://t.co/6rqh3PNetC

It remains unclear whether this was an in-house production or merely a repost of something Trump saw online, which he has been known to do before: In 2018, the Trump administration was warned by HBO to stop using Game of Thrones-themed memes to promote his latest policy moves, such as the border wall or a new raft of sanctions against Iran.

Also on rt.com
‘Wall is Coming’: Trump raises stakes with another Game of Thrones meme


Trump also fell afoul of Twitter’s copyright infringement rules when he posted a meme video soundtracked by REM’s ‘Everybody Hurts’. In addition, Prince, Pharrell Williams, and the Rolling Stones have all complained about the use of their music during Trump’s campaign rallies in the past.

Trump’s latest gaffe led to the inevitable consternation and confusion on Twitter.

Okay, this is really frightening. We have a president who makes these propaganda videos you’d expect to see from Stalinist Russia or North Korea. And millions of brainwashed Americans eat this crap up. Meanwhile, we have an inept media that is powerless to do anything about it.