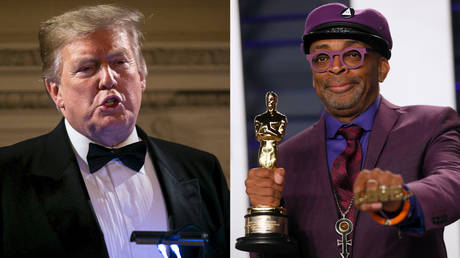 Lee won the Oscar for Best Adapted Screenplay for ‘BlacKkKlansman’ along with Charlie Wachtel, David Rabinowitz and Kevin Willmott. He was visibly annoyed at losing out to ‘Green Book’ for the Best Picture award, however.

During his acceptance speech, Lee noted that his win came during Black History Month before providing an abridged version of the history of slavery in the US, and paying tribute to his grandmother who graduated from the predominantly-black Spelman College even though her mother was a slave. He then gave a call to political action in a veiled swipe at Trump.


“The 2020 presidential election is around the corner,” Lee remarked. “Let’s all mobilize, let’s all be on the right side of history, let’s choose love over hate, let’s do the right thing,” the director said to a cheering crowd, who gave a standing ovation.

It didn’t take long for the president to respond via his preferred method of mass communication, Twitter.

Be nice if Spike Lee could read his notes, or better yet not have to use notes at all, when doing his racist hit on your President, who has done more for African Americans (Criminal Justice Reform, Lowest Unemployment numbers in History, Tax Cuts,etc.) than almost any other Pres!

Reaction to the president’s remarks were mixed, with some Twitter users criticising Lee for taking “cheap shots” at Trump, while others took umbrage at the president’s tweets.

It’s in poor taste for the president to use twitter and the podium to bash his foes, but there you go.

He won an Oscar. You had to beg Japan for a Nobel Prize nomination. SAD!

Spike Lee never said your name. Were you watching in case someone did evoke the sickening spirit of your name,synonymous w nothing but disgrace,crime &soullessness?You’ve done nothing for any minority group-not even your dwindling base of poorly educated. You’re demented. Resign