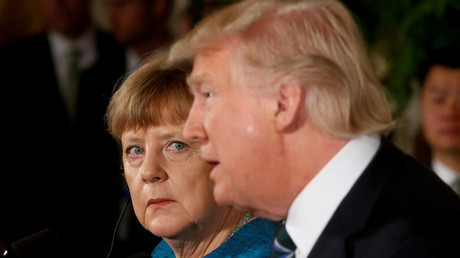 Amid a national furor over his immigration policy, US President Donald Trump took to Twitter to call for stronger border laws, citing Germany’s ‘open-door’ migration policy as a “big mistake.”

“Why don’t the Democrats give us the votes to fix the world’s worst immigration laws?,” Trump tweeted Monday. “Where is the outcry for the killings and crime being caused by gangs and thugs, including MS-13, coming into our country illegally?”

Trump has regularly called for Democrats to support his proposed tough immigration laws, including funding a 2,000-mile long wall on the US’ southern border with Mexico. The president is currently planning on meeting House Republicans on Tuesday to weigh up two proposed pieces of immigration legislation, one ‘moderate’ and one more hard-right.

However, the President has come under fire from Democrats, celebrities, and the Twitter #resistance for his administration’s policy of separating the children of illegal immigrants from their parents and detaining them. In a Washington Post op-ed over the weekend, former First Lady Laura Bush called the separation policy “cruel” and “immoral.”

The recent increase in detentions is a consequence of the Trump administration’s new ‘zero-tolerance’ policy on illegal immigration that prosecutes all illegal border-jumpers. As illegal immigrants have allegedly committed a crime, and as their children cannot be taken to jail, they are detained until their parents have appeared in court.

“Children are being used by some of the worst criminals on earth as a means to enter our country,” Trump continued. “Has anyone been looking at the Crime taking place south of the border. It is historic, with some countries the most dangerous places in the world. Not going to happen in the U.S.”

Children are being used by some of the worst criminals on earth as a means to enter our country. Has anyone been looking at the Crime taking place south of the border. It is historic, with some countries the most dangerous places in the world. Not going to happen in the U.S.

It is the Democrats fault for being weak and ineffective with Boarder Security and Crime. Tell them to start thinking about the people devastated by Crime coming from illegal immigration. Change the laws!

South of the US, the Central American countries of El Salvador and Honduras have the world’s highest and second-highest murder rates respectively. Mexico’s murder rate is also over three times higher than the US. With Mexico gearing up for local and national elections next month, over 113 politicians have been murdered during campaigning season, as drug cartels use violence and fear to exert their influence on politics.

Trump’s immigration-focused tweet barrage continued, as he called Germany’s ‘open-door’ migrant policy a “big mistake” that “strongly and violently changed” European culture. “We don’t want what is happening with immigration in Europe to happen with us!,” he added.

The people of Germany are turning against their leadership as migration is rocking the already tenuous Berlin coalition. Crime in Germany is way up. Big mistake made all over Europe in allowing millions of people in who have so strongly and violently changed their culture!

We don’t want what is happening with immigration in Europe to happen with us!

Trump’s bashing of German immigration policy comes after a dispute between German Chancellor Angela Merkel and hardliners within her own party threatened to topple her fragile coalition government. German Interior Minister Horst Seehofer unveiled a new strategy that would allow German authorities to turn back refugees at its borders if they have already applied for asylum in other EU countries. But Chancellor Merkel argued against the current proposal, saying Berlin can’t unilaterally shut its borders without consulting with its European neighbors.

In 2015, Merkel declared Germany open to migrants and refugees, prompting an unprecedented influx of almost two million migrants, free to roam at will in the border-free EU.  As crimes committed by migrants and asylum seekers – including sexual assaults and terrorist attacks – have become more commonplace in Europe, security has been dialled up and an anti-migrant backlash has grown stronger.

Trump’s Monday morning tweets also come just one day after he spoke with Hungarian Prime Minister Viktor Orban by phone. An outspoken opponent of Merkel’s open-door refugee policy, Orban spoke with Trump about the need for strong national borders, according to a White House statement.