President Trump has signed an immigration order requiring asylum seekers to make their claim at their point of entry to the US, and barring illegal immigrants from requesting asylum.

“We need people in our country but they have to come in legally and they have to have merit,” Trump told reporters on Friday, before departing for Paris.

The order comes after weeks of Trump promising to crack down on illegal immigration, as a caravan of several thousand migrants makes its way toward the US’ southern border from Central America. The caravan is currently around 600 miles from the United States.

Our military is being mobilized at the Southern Border. Many more troops coming. We will NOT let these Caravans, which are also made up of some very bad thugs and gang members, into the U.S. Our Border is sacred, must come in legally. TURN AROUND!

The directive is a temporary measure, and circumvents current laws that state anyone who applies for asylum in the US is eligible to have their case heard, no matter whether they arrived legally or illegally. As such, it is likely to be challenged in federal courts.

Those denied asylum under the new order will still be able to apply for ‘withholding of removal’ – a limited form of asylum that doesn’t allow for green cards or family members to join the applicant; or asylum under the United Nations Convention Against Torture. In both cases, the applicant has to demostrate a credible threat if they were to return home.

It forms one part of the president’s latest efforts to tighten border security and clamp down on immigration. Before the midterm elections, Trump mulled ending birthright citizenship – the policy that ensures all children born on US soil are automatically citizens – by executive order.

“We’re the only country in the world where a person comes in and has a baby, and the baby is essentially a citizen of the United States for 85 years with all of those benefits,” Trump told Axios. “It’s ridiculous. It’s ridiculous. And it has to end.” 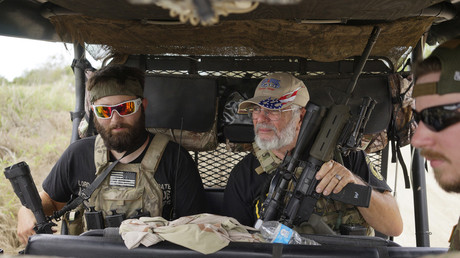 In addition to policy changes, Trump has also beefed up the physical security of the US’ 2,000-mile border with Mexico.

Over 5,200 US troops have been sent to the border to erect razor-wire fences and provide surveillance and logistical support to the National Guardsmen and Customs and Border Patrol agents already there.

The president said last week that “anywhere between 10,000 and 15,000 military personnel” may be deployed to the border, if the current contingent is not enough.

Trump also underscored that anyone who does cross the US border illegally will be detained in “tent cities” and other immigration detention facilities, as “we’re not doing releases” anymore. Trump has been a long time critic of the Obama administration’s ‘catch and release’ policy, under which apprehended immigrants would be released and asked to return for a court hearing at a later date. Unsurprisingly, many do not.