Boris Johnson would make a ‘great prime minister’ and Theresa May made a bad Brexit deal by ignoring his advice, US President Donald Trump told a British tabloid.

The US President described the former foreign secretary as “a very talented guy.”

“I like him a lot,” he said. “I have a lot of respect for Boris. He obviously likes me, and says very good things about me. I was very saddened to see he was leaving government and I hope he goes back in at some point. I think he is a great representative for your country,” Trump told The Sun. 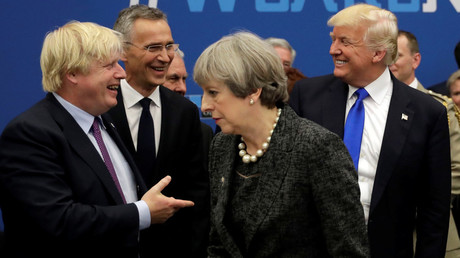 Johnson resigned as foreign secretary on Monday, in protest over May’s proposal for a “soft” Brexit from the European Union. Under the arrangement, the UK would lose all influence in the bloc but still have to abide by its multitudinous regulations.

“I am not pitting one against the other,” the US president said when asked if he’d like to see Johnson as PM. “I am just saying I think he would be a great prime minister. I think he’s got what it takes.”

Trump also expressed disappointment with May’s handling of Britain’s withdrawal from the EU.

“I would have done it much differently. I actually told Theresa May how to do it but she didn’t agree, she didn’t listen to me,” Trump told the tabloid. “I would actually say that she probably went the opposite way. And that is fine. She should negotiate the best way she knows how. But it is too bad what is going on.”

The US president also took potshots at the mayor of London, Sadiq Khan.

“I think he has not been hospitable to a government that is very important. Now he might not like the current President, but I represent the United States,” he said.

Trump arrived in the UK on Thursday for a state visit, after attending the NATO summit in Belgium. He is scheduled to meet with Russian President Vladimir Putin in Finland on Monday.