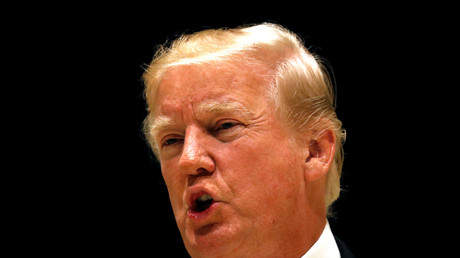 US President Donald Trump has denied being “racist” in the wake of a scandal and wide condemnation triggered by his alleged reference to Haiti and African nations as “s***holes” amid attempts to reach a deal on immigrant children.

“I’m not a racist. I am the least racist person you have ever interviewed, that I can tell you,” Trump told reporters on Sunday in Florida, where he was having dinner with Republican House Majority Leader Kevin McCarthy.

The US leader said he is “willing and able” to reach a deal to protect immigrants brought to the United States as children. The Obama-era Deferred Action for Childhood Arrivals (DACA) program shields those individuals, often called the Dreamers, from deportation.

The DACA program, however, is “probably dead,” all because of the Democrats’ alleged unwillingness to make a deal, Trump said earlier.

DACA is probably dead because the Democrats don’t really want it, they just want to talk and take desperately needed money away from our Military.

Trump previously denied using the word “s***hole,” but admitted his language was “tough” during the Friday meeting with lawmakers at the White House, where DACA was discussed. While some of the attendants, including Democratic Senator Dick Durbin, insist Trump used the exact word, others denied it or said they could not recollect the exact terminology.

The controversy sparked a strong backlash, both in the US and internationally, with Trump’s opponents accusing him of flat-out racism, and countries he allegedly insulted demanding explanation and apologies.