US President Donald Trump rejected the suggestion he might change his tune on NATO military spending once he boards the Air Force One, calling himself “very consistent” and “stable genius” once again.

At the summit in Brussels, Trump bluntly demanded that all NATO countries devote at least 2 percent of their GDP to military spending immediately, and not by 2025.

“What good is NATO if Germany is paying Russia billions of dollars for gas and energy?” he asked, adding that the US is “paying for Europe’s protection, then loses billions on trade.”

At the press conference on Thursday, a Croatian reporter dared ask if Trump would change his mind once he leaves Brussels for London. 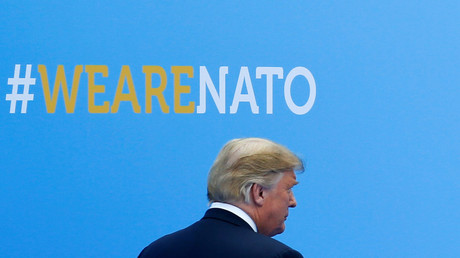 “We understand your message,” the reporter asked. “But some people ask themselves, will you be tweeting differently when you board the Air Force One?”

“No, that’s other people that do that. I don’t. I’m very consistent. I’m a very stable genius,” Trump said.

The phrase echoed a tweet from January, when Trump dismissed claims about his mental and physical health contained in a sensationalist tell-all book that now seems mostly forgotten.

It remains to be seen whether Trump really meant it about consistency, when it comes to soccer, however.

He interrupted the reporter’s question to congratulate Croatia on their FIFA World Cup victory over England on Wednesday, which earned the Balkans country a spot in the finals for the first time in history.

President Kolinda Grabar-Kitarovic mounted a charm offensive at the summit, presenting Trump with a Croatian soccer jersey as giving him plenty of attention.

However, the US president’s next destination is London, where he will meet with British Prime Minister Theresa May and other officials. It remains to be seen whether he will make any soccer-related comments.

Of the 29-member alliance, only the UK, Poland, Estonia and debt-ridden Greece met the benchmark in 2017. Croatia is one of the laggards, with 1.3 percent. The US was at 3.6 percent, pouring almost $700 billion into the Pentagon.