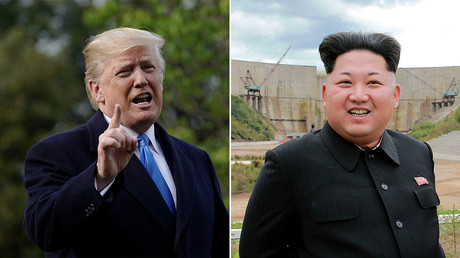 The US president and North Korea’s Kim Jong-un will finally sit down for a summit on June 12 in Singapore, Donald Trump has stated. The date and venue for the meeting has long been the subject of speculation.

“We will both try to make it a very special moment for world peace,” Trump stated.

Speculation had been rife that the meeting, expected to focus the Kim Jong Un’s missile program, could be hosted in a number of nations like Mongolia or even the demilitarized zone on the Korean peninsula.

The highly anticipated meeting between Kim Jong Un and myself will take place in Singapore on June 12th. We will both try to make it a very special moment for World Peace!

Trump’s statement comes just a day after US Secretary of State Mike Pompeo secured the return of three American prisoners to home soil in a whirlwind 13 hour visit to North Korea’s Pyongyang.

Should the June gathering go ahead, it will mark a dramatic turnaround in political relations between North Korea and the US, two nations which officially have not had ties since the 1950s.

Relations appeared to reach an all-time low last year when both leaders very publicly threatened to launch attacks on one another’s nations.

In August, Trump warned that if North Korea continued to threaten missile strikes against US territories “they will be met with fire and fury.” When referring to his counterpart online, the US president also used terms such as ‘madman’ as well as ‘short and fat.’

Kim Jong Un of North Korea, who is obviously a madman who doesn’t mind starving or killing his people, will be tested like never before!

Being nice to Rocket Man hasn’t worked in 25 years, why would it work now? Clinton failed, Bush failed, and Obama failed. I won’t fail.

Pyongyang responded by saying that Donald Trump was “begging” for a nuclear conflict.

The tit-for-tat exchanges appeared to bring the two nations closer to war and, at one stage, the White House even intimated that an armada – the USS Carl Vinson aircraft carrier – was steaming towards North Korea when, in fact, it was heading in the opposite direction.

But earlier this year Trump suddenly moved away from the erratic online threats and name-calling, and suggested he would like to meet with the leader he once called “little rocket man” as soon as possible.