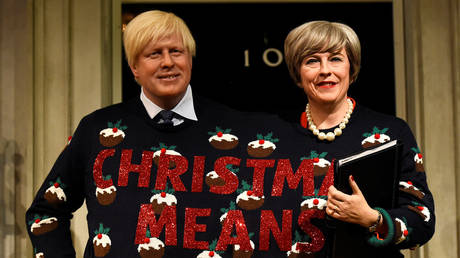 With British MPs set for a last-ditch vote on a slightly abridged version of the Brexit deal proposed by PM Theresa May, the US President wished her luck. But he also had kind words for one of her fiercest critics, Boris Johnson.

Johnson, the arch-advocate of the Leave campaign and former foreign secretary, is considered a viable contender for the Tory leadership. Famed for his ‘damn the torpedoes’ attitude towards parting ways with the EU, he agreed to support May during the Friday vote after she pledged to resign once her proposal makes it through the House. Privately, he reportedly said the proposal was “dead anyway”.


So, which of the two British politicians gets the support from the leader of the free world? Both it seems. US President Donald Trump called Prime Minister May “a very nice lady” and praised her for fighting when asked about her likely resignation by journalists on Thursday.

“I hope she does well. I hope the Brexit movement and everything happening there goes very well. But Theresa May’s a very good woman, and I’ll tell you what, she’s strong, she’s tough and she’s in there fighting”, he said.

But what about BoJo becoming PM after her, Mr. President? “I like Boris Johnson a lot. He’s a friend of mine”, Trump replied. Does he even know that his two friends may not be friendly with each other?

Also on rt.com
Trump publicly bashes May AGAIN, says Brexit is only ‘great’ for EU, will hurt UK-US trade deal


Trump famously offered his advice to May on how to handle Brexit negotiations with Brussels and later publicly gloated about the process going sideways, saying this happened because she didn’t follow his instructions. He also called Johnson “a very talented guy” who would make “a great prime minister” after the firebrand politician resigned from May’s cabinet.