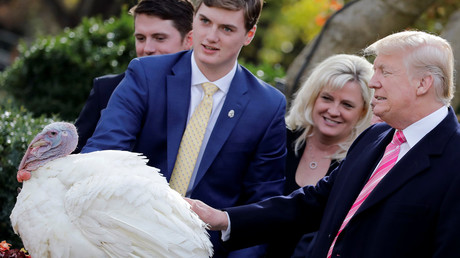 President Donald Trump has pardoned two Thanksgiving turkeys while joking about keeping his promise to overturn all of his predecessors decisions by killing Obama’s birds.

Trump was joined by first lady Melania Trump and son Barron in the Rose Garden to grant ‘Drumstick’ and ‘Wishbone’ mercy before Thanksgiving on Tuesday. Trump told the waiting press that he was “pleased to report that unlike millions of other turkeys at this time of year, Drumstick has a very bright future ahead of him.”

And the National Thanksgiving Turkey is… DRUMSTICK!

Drumstick and Wishbone will now live out the rest of their blissful Turkey years at Virginia Tech’s “Gobbler’s Rest” enclosure. Last year’s saved souls, ‘Tater’ and ‘Tot,’ pardoned by President Obama, also reside at the safe haven. Trump said while he has been “very active in overturning” Obama’s executive actions, Tater and Tot “can rest easy”.

“I have been informed by the White House counsel’s office that Tater and Tot’s pardons cannot, under any circumstances, be revoked,” Trump joked. Following the ceremony Trump flew with his family to his Mar a Lago golf club in Florida.

The Thanksgiving turkey pardoning is a yearly tradition traced back to President Abraham Lincoln in 1863. The act became official, however, under President George H W Bush in 1989.