Donald Trump Jr. has released his direct message exchanges with the Wikileaks Twitter account during the 2016 presidential election, showing that he had no idea about the Podesta email leak before it happened.

The messages, which Trump Jr’s lawyers turned over to congressional investigators, were first published by the Atlantic Monday.

“Here is the entire chain of messages with @wikileaks (with my whopping 3 responses) which one of the congressional committees has chosen to selectively leak. How ironic!,” Trump Jr. tweeted Monday.

Julian Assange, the founder of Wikileaks, tweeted Monday that he could not confirm the DMs, but said that what was published in the Atlantic show “WikiLeaks loves its pending publications and ignores those who ask for details.”

“Trump Jr. was rebuffed just like Cambridge Analytica. In both cases, WikiLeaks had publicly teased the publications,” Assange tweeted. “Thousands of people asked about them.”

WikiLeaks loves its pending publications and ignores those who ask for details. Trump Jr. was rebuffed just like Cambridge Analytica. In both cases WikiLeaks had publicly teased the publications. Thousands of people asked about them. 2/

Assange added that Wikileaks had “chutzpah” for trying to convince Trump Jr. to leak his father’s tax returns and his emails about the meeting with the Russian lawyer.

“WikiLeaks appears to beguile some people into transparency by convincing them that it is in their interest,” Assange tweeted.

WikiLeaks has such chutzpah that it allegedly tried to convince Trump Jr to leak his father’s tax returns & his own “Russian lawyer meeting” emails (he did). WikiLeaks appears to beguile some people into transparency by convincing them that it is in their interest. 4/

The exchanges show that Wikileaks reached out to Trump Jr., offering him the password to an anti-Trump PAC’s website they suggested he should look into. The whistleblower site told Trump Jr. to visit the site’s “About” section to see who was behind the effort.

“Off the record I don’t know who that is but I’ll ask around,” Trump Jr. wrote the next day. “Thanks.”

According to the Atlantic, Trump Jr. then emailed all the senior members of the Trump campaign to inform them about the communication.

On October 3, 2016, Wikileaks sent another message to Trump Jr., asking him to push a story that former secretary of state Hillary Clinton wanted to drone strike the WikiLeaks founder, Assange.

“Already did that earlier today. It’s amazing what she can get away with,” Trump Jr. wrote back.

Minutes later, Trump Jr. asked about an upcoming leak that he was hearing about at the time.

“What’s behind this Wednesday leak I keep reading about?” Trump Jr. wrote.

Wikileaks did not respond until after the site posted thousands of emails from Clinton’s campaign chairman John Podesta on October 7.

On October 12, five days later, Trump Jr. received another DM from the Twitter account with a link to all of the Podesta emails. The account suggested that Trump Jr. should tell his followers to dig through the content.

“There’s many great stories there the press are missing and we’re sure some of your followers will find it,” Wikileaks wrote.

On October 14, Trump Jr. tweeted the link that Wikileaks sent him, telling his followers who had the time to “read about all the corruption and hypocrisy.”

The communication appears to show that Trump Jr. did not have any advanced knowledge of the hacked emails, something the Trump campaign has been accused of in the past. 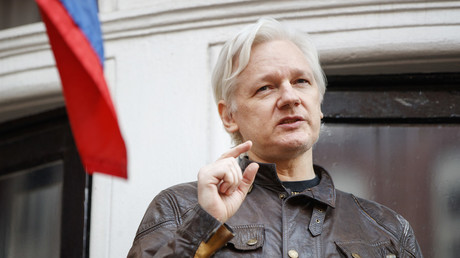 The Wikileaks account sent several more messages to Trump Jr. over the following months, asking him to leak one or more of his father’s tax returns to the site, advising his father not to concede if he lost the election, and asking if he could use his political powers to “suggest that Australia appoint Assange ambassador” to Washington DC.

“They won’t do it, but it will send the right signals to Australia, UK + Sweden to start following the law and stop bending it to ingratiate themselves with the Clintons,” Wikileaks wrote.

Trump Jr. did not respond to any of the further DMs. However, Trump Jr. seemed to listen when Wikileaks said they were “very interested” in leaking an email exchange he had with a Russian lawyer who had incriminating information about the Democrats.

“We think this is strongly in your interest. Why? Because otherwise your opponents (who clearly have a copy) will gradually ‘milk’ phrases from the email(2) with their own spin/context added according to what suits THEIR timing and THEIR strategy,” Wikileaks wrote. “Us publishing not only deprived them of this ability but is beautifully confounding.”

Later that same day, Trump Jr. posted the full content of the emails on his Twitter account, saying the meeting turned out to be “the most inane nonsense I ever heard.”