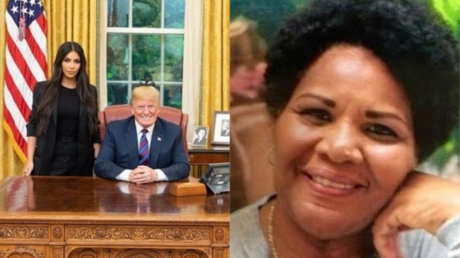 The White House confirmed on Wednesday that the president signed a commutation for Johnson, who has served over 20 years in prison since she was sentenced to life without parole, plus 25 years, in 1996.

“Ms. Johnson has accepted her responsibility for her past behavior and has been a model prisoner over the past two decades. Despite receiving a life sentence, Alice worked hard to rehabilitate herself in prison, and act as a mentor to her fellow inmates,” the statement read.

Last week, Kardashian West met with fellow reality TV star Trump in the White House to push for Johnson’s pardon. In the run-up to the meeting, West was in contact with the president’s senior advisor and son-in-law, Jared Kushner, for several weeks regarding the case.

The phone call I just had with Alice will forever be one of my best memories. Telling her for the first time and hearing her screams while crying together is a moment I will never forget.

At the time, Kardashian West told MIC that Trump “really spent the time to listen to our case that we were making for Alice. He really understood, and I am very hopeful that this will turn out really positively.”

Kardashian West announced the “BEST NEWS EVER!!!!” via Twitter, before going on to thank the president and Kusher. West also revealed that she herself broke the news to Johnson over the phone.

So grateful to @realDonaldTrump, Jared Kushner & to everyone who has showed compassion & contributed countless hours to this important moment for Ms. Alice Marie Johnson. Her commutation is inspirational & gives hope to so many others who are also deserving of a second chance.

Johnson’s case was first noticed by Kardashian West when she saw a video about it on social media and decided to pay for a new legal team to fight the sentence. Johnson was convicted and sentenced to life without parole in 1996 for her role in facilitating communications in a cocaine trafficking operation in Memphis, Tennessee.