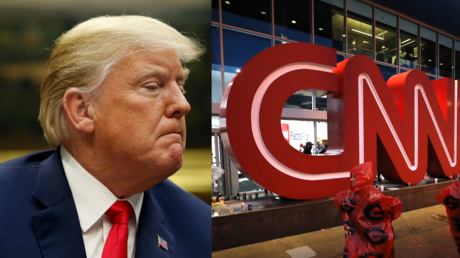 CNN has fired back at Donald Trump after the president skewered journalist Carl Bernstein, who co-authored a Russiagate blockbuster for the network that has since come under scrutiny after a source for the story recanted.

“Sloppy @carlbernstein, a man who lives in the past and thinks like a degenerate fool, making up story after story, is being laughed at all over the country!” Trump wrote. He said that the network was being “torn apart from within” after being “caught in a major lie and refusing to admit the mistake.”

Unshaken, the network fired back on Twitter. “There may be many fools in this story but @carlbernstein is not one of them,” CNN’s communications team wrote.

“CNN does not lie. We report the news. And we report when people in power tell lies. CNN stands by our reporting and our reporters.”

Make no mistake, Mr. President, CNN does not lie. We report the news. And we report when people in power tell lies. CNN stands by our reporting and our reporters. There may be many fools in this story but @carlbernstein is not one of them.

Bernstein, who became a household name after helping to break the Watergate scandal, posted his own response to the president’s incendiary tweet, claiming that he has spent his career “bringing the truth to light” and won’t be intimidated by “taunts.”

“@CNN stands by its story, and I stand by my reporting,” he tweeted.

.@realdonaIdtrump– I have spent my life as a journalist bringing the truth to light, through administrations of both parties. No taunt will diminish my commitment to that mission, which is the essential role of a free press. @CNN stands by its story, and I stand by my reporting.

The Twitter feud comes after CNN signaled that it was standing by its explosive report on an infamous Trump Tower meeting between his son and Russians who allegedly offered him dirt on Hillary Clinton. Ex-Clinton aide Lanny Davis, who now represents Michael Cohen, admitted earlier this week that he was an anonymous source for the story and recanted key details he provided to CNN. Numerous media outlets have since corrected reports about Trump having prior knowledge of the 2016 meeting – but CNN won’t budge, even after claiming that Davis declined to comment on the bombshell revelations.

CNN has painted itself into a tiny, twisted corner. Is there anyone who doubts that this sentence in its “blockbuster” story was flat out false? If it’s not false, how they can refuse to explain it? Are we fine with major media deceit if it’s in service of a particular agenda? pic.twitter.com/PEQX0gfV0j

Despite the vigorous rebuttals offered by Bernstein and CNN, the network has yet to address why it claimed in its original report that Davis declined to comment for the Trump Tower blockbuster – even after he came forward as a source.

The newsletter from CNN’s media reporters pretends to address the scandal surrounding its “blockbuster” Cohen debacle, but it entirely ignores – like the network itself – the key problem: their reporters outright lied when they said Lanny Davis (their source) refused comment. pic.twitter.com/0PinUAlhl4

The troubling contradiction was noted by the president, who posted a follow-up tweet after sparring with the network.

“Oh well, so much for CNN saying it wasn’t Lanny. No wonder their ratings are so low, it’s FAKE NEWS!”

“Lanny Davis admits being anonymous source in CNN Report.” @BretBaier Oh well, so much for CNN saying it wasn’t Lanny. No wonder their ratings are so low, it’s FAKE NEWS!