US President Donald Trump has apparently fired Veterans Affairs Secretary David Shulkin, and says he is nominating the White House physician to replace him.

On Wednesday afternoon, Trump tweeted about nominating Admiral Ronny L. Jackson, the presidential physician, as Shulkin’s replacement. He will need to be confirmed by the Senate. In the interim, the VA will be led by Robert Wilkie, currently the Undersecretary of Defense for Personnel and Readiness.

….In the interim, Hon. Robert Wilkie of DOD will serve as Acting Secretary. I am thankful for Dr. David Shulkin’s service to our country and to our GREAT VETERANS!

“I appreciate the work of Dr. David Shulkin and the many great things we did together at Veterans Affairs, including the VA Accountability Act that he was helpful in getting passed,” Trump said in a statement, thanking Shulkin for his service at the VA.

Trump called Jackson a “highly trained and qualified” member of the military, who has a “deep appreciation” for the debt the US owes to its military veterans.

Shulkin, a holdover from the Obama administration, helped Trump reform the troubled agency in 2017. A February 2018 report by the VA inspector general, however, accused the secretary of improperly accepting Wimbledon tickets during his trip to Britain last year and other “serious derelictions.” 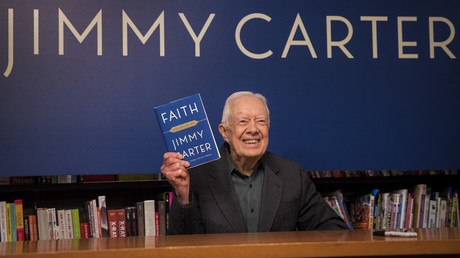 The IG also accused Shulkin’s chief of staff of making false statements and altering a document so the secretary’s wife could accompany him on a trip to Britain and Denmark at the cost of $4,312 to the VA. Shulkin initially denied the charges, then offered to reimburse the agency for the costs. His chief of staff retired following the report’s publication.

Admiral Jackson served as the White House physician during the presidencies of Barack Obama and George W. Bush. He was thrust into the spotlight in January, when he proclaimed Trump was in excellent mental and physical health over objections from Democrats and the media. Jackson brushed off suggestions that Trump was obese and could have heart problems by crediting his “incredibly good” genes and a lifetime of abstinence from alcohol and tobacco.

Shulkin is the second member of Trump’s cabinet to leave after having dubious travel practices made public. Health and Human Services Secretary Tom Price resigned in September 2017, after it emerged that he chartered private jets for more than 26 overseas trips, at the reported cost of more than $1 million to US taxpayers.