President Donald Trump has fired off a tweet against North Korean supreme leader Kim Jong-un, claiming to have a nuclear weapon launcher “more powerful one than his.”

Trump responded Tuesday night to comments Kim made earlier this week during a New Year speech.

“The entire United States is within range of our nuclear weapons, and a nuclear button is always on my desk. This is reality, not a threat,” Kim said, adding that “these weapons will be used only if our security is threatened.” 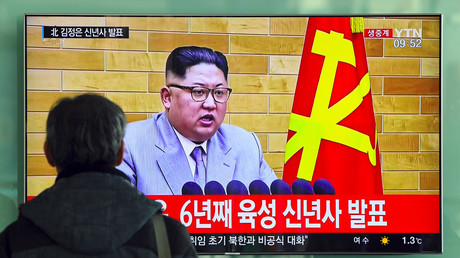 Trump tweeted in return that not only is his own “Nuclear Button” bigger and better, but it actually works. He sarcastically pleaded Tuesday night for “someone from his depleted and food starved regime” to “please inform” Kim of those claims.

In Kim’s New Year message, he also expressed interest in working diplomatically with South Korea on the upcoming 2018 Winter Olympics.

Trump tweeted about North Korea earlier Tuesday, saying that “sanctions and ‘other’ pressures are beginning to have a big impact.” Trump referenced recent military defections and Kim’s willingness to talk with South Korea.